Battle of the Bulge Memorial at Lake Eola

Battle of the Bulge Memorial at Lake Eola

Battle of the Bulge Memorial

The Battle of the Bulge Memorial in Lake Eola Park in Downtown Orlando, Florida. This six-foot, bronze statue of an American G.I. sits on a bronze-outlined, white star set into a 34-foot diameter concrete base. The statue was sculpted by Chris Scala, a local artist from Orlando, and dedicated on December 16, 1999, the 55th anniversary of the Battle of the Bulge. American, Belgian, and Luxembourger flags fly in a semi-circle behind the statue. Scala also duplicated the monument for a memorial in Clervaux, Luxembourg.

The Battle of the Bulge was a major offensive campaign launched by German forces between December 16, 1944, and January 25, 1945. The battle was waged in the Ardennes region of France, Luxembourg, and Belgium's Wallonia region and involved armies from the United States, the United Kingdom, Canada, Belgium, France, and the Luxembourgish resistance. The German attack was unexpected, causing the Allies, especially the United States, to lose a significant number of casualties. The goal of the offensive was to separate the British and American Allied forces in half, capture the Belgian city of Antwerp, and then surround the four Allied armies. While the Germans had the benefit of surprise and initially poor weather conditions that grounded the Allies' air forces, the Allied Forces were ultimately able to win the battle thanks to defensible terrain and improved weather conditions that allowed the use of air attacks. The battle is also known as Unternehmen Wacht am Rhein ("Operation Watch on the Rhine") to the Germans, Bataille des Ardennes ("Battle of the Ardennes") to the French, and the Ardennes Counteroffensive to the Allies as a whole. The Battle of the Bulge was the largest and bloodiest battle fought by the United States in World War II.

Copyright to this resource is held by Cody Schuppe and is provided here by RICHES of Central Florida for educational purposes only.

VETERANS of the BATTLE of the BULGE ARDENNES

DEDICATED TO THE GALANT MEN AND WOMEN WHO PARTICIPATED IN THE BATTLE OF THE BULGE, WORLD WAR II, 16 DECEMBER 1944 THRU 25 JANUARY 1945 IN BELGIUM AND LUXEMBOURG, THE GREATEST BATTLE EVER FOUGHT BY THE UNITED STATES ARMY. THE VETERANS OF THE BATTLE OG THE BULGE ASSEMBLED HERE ON 16 DECEMBER 1999 TO COMMEMORATE THE 55TH ANNIVERSARY OF THE EVER FAMOUS AMERICAN VICTORY, AND HONOR ALL WORLD WAR II VETERANS. 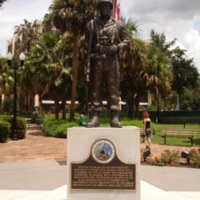