Two pages from the Year End Report from Congressman Lou Frey, Jr. newsletter mailed to citizens of the 9th Congressional District of Florida, represented by Congressman Louis "Lou" Frey, Jr. (1934-2019), who served in the U.S. House of Representatives from 1969 to 1979. He was on several committees during his time in office, including the Select Committee on Narcotics Abuse and Control and the Science and Technology Committee. He was also the chairman of the Young Republicans of Florida.

In the first article, which is continued on both pages, Representative Frey discusses the legislative accomplishments that he made in the 94th Congress. These include an amendment to the McNamara-O'Hara Service Contract Act (SCA) of 1965; the creation of a Select Committee on Narcotics Abuse and Control in the House of Representatives; provisions for long-term financing for public broadcasting, the establishment of a U.S. Metric Board; the authorization from the Energy Research and Development Administration (ERDA) for a federal program for research and development related to electric vehicle technologies; the extension of the Educational Broadcasting Facilities Program to include the distribution of information on health, education, and social services; the authorization of a rape prevention and control program in Community Health Centers, the establishment of science and technology policy. Frey also cites legislation that was passed, but compromised in committee: the extension of veterans education benefits, provisions for an unrestricted pension for World War I veterans and their widows, and the removal of the outside earnings limitation on Social Security recipients. He also discusses Congress' clash with the Executive Branch over spending bills and top priorities for the 94th Congress.

The second article discusses the Veteran's Administration (VA) site evaluation of existing medical facilities for veterans in Orlando. The article also addresses public requests for an outpatient clinic for veterans in Brevard County.

In the third article, Frey announces the final order to make Orlando one of the two international airport entry points in Central Florida. The Orlando Jetport was expected benefit from gaining the status as an international port of entry, which would allow international travelers, especially tourists, to arrive directly to the area.

Finally, Congressman Frey discusses his appointment to the Select Committee on Narcotics Abuse and Control in the fourth article. According to Frey, the committee determined that federal efforts to prevent and control drug abuse has not been effective. As a result, the committee drafted a bill advocating for mandatory sentences for drug-related offenses and no opportunities for parole, bond, or speedy trials for non-addict drug dealers.

While Congress clashed with the Executive over every major bill, some compromises did emerge. The public works jobs program, for example, was vetoed twice and rewritten three times. While less ambitious than the first version, the final legislation will provide 300,000 jobs. Congress also extended general revenue sharing, providing $25.6 billion in federal revenues through September 30, 1980.

Other top-priority legislation completed by the Congress included: the end of the oil depletion allowance; the beginnings of adequate funding for development of alternate energy sources; a defense budget the military and Congress can live with; a seven percent increase in veterans pensions and a temporary increase in unemployment compensation taxes on employers.

We’re looking forward to many new projects--and re-working some old ones during the coming year: legislation including professionals under the Service Contract Act; establishing a National Veterans Cemetery in Central or East Central Florida; removing permanently the time limitation for veterans to complete their education; doing away with the income earnings limitation on senior citizens eligible for social security; and protection for individuals purchasing condominiums.

A capsulization of the 94th congress in chart form appears on the next page--and we do mean capsule! For more information on any of these subjects just write my office.

International port of entry status for the Orlando Jetport became a reality this Fall. OnOctober 20, the Secretary of Treasury signed the final orders make Orlando one of the two international entry points in Central Florida.

The new status, a victory after years of hard work, will bring international passengers directly to Central Florida. From there the tourists will be able to see our attractions in Orlando and visit Brevard County to tour Cape Canaveral and stay on the coast.

Projections by local officials show an estimated 5 million pounds of export cargo and a third of a million international passengers enplaning in Orlando by 1980.

Initially, the customs office at McCoy Jetport will employ part 12 part time baggage/cargo inspectors in addition to a Port Director, an Inspector and an Inspectional Aide. The number of employment opportunities will increase as the work load at the customs office increases. Tampa, an international port of entry since 1913, now employs almost 40 full time customs officials.

So, while the process was long and often frustrating, pushing for the international status was certainly worth it.

Legislation we worked hard on during the 94th Congress resulted in my appointment to the Select Committee on Narcotics Abuse and Control.

The focus of the Committee hearings held during the closing days of the session was the federal efforts to curb drug abuse by cutting drug traffic. We listened to and questioned every agency head who had any link with our drug enforcement effort. I wish I could say we discovered a cure all or a magic answer during those two weeks of hearings. We didn’t.

What we did discover is that the federal effort, while it is well-intentioned, is not very effective. Every administrator pointed the finger elsewhere--not enough money, not enough manpower, not enough time, crowded court calendars, crowded detention facilities, crowded correction and rehabilitation centers.

It was recently reported that most drug addicts must steal $11,000 a year to support their habits. Multiply that by 800,000 hard drug addicts in the United States and you have some idea of what drugs cost this country in one year. The statistics are frightening: 5,000 overdose deaths annually; 27 billion in drug related crime costs; and the number of hard drug addicts has doubled since 1973.

Our drug bill calling for stiff mandatory sentences, no parole, no bond and speedy trials for those non-addict underworld businessmen who turn a profit on drugs almost became law a few years ago. We were almost successful this Congress.

But next year, with a Committee specifically charged by the House to come up with tough drug legislation, we may see the light at the end of the tunnel. 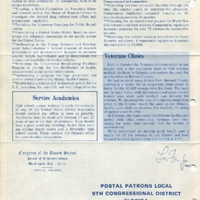