Centennial Book of the Cathedral Church of St. Luke

Centennial Book of the Cathedral Church of St. Luke, which chronicles the history of the first 100 years of the Cathedral Church of St. Luke. The church is located at 130 North Magnolia Avenue in Dowtown Orlando, Florida, and was founded in 1867 by Francis W. Eppes (1801-1881), the nephew of Thomas Jefferson (1743-1826). The congregation originally worshipped in a log cabin and services were conducted by Eppes, despite his status as a layman.

Originally published by the Cathedral Church of St. Luke.
Donated to Orlando Remembered by Daniel B. Smith.

Copyright to this resource is held by the Cathedral Church of St. Luke and is provided here by RICHES of Central Florida for educational purposes only. 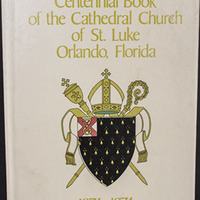