This one-story commercial building in Winter Garden, Florida, was constructed in 1922 as part of land platted by J. D. McMillan in 1915. The building at 126 West Plant Street was originally owned by the McMillan-Bray Hardware Company. The store was founded in 1906 by George W. "Buttles" Bray and his brother-in-law, Malcolm Y. McMillan. After several years, Bray sold out to McMillan, who later sold the business to Joseph Bumby Hardware Company.

In 1920, Bray went back into the hardware business at another location, and in 1934, he moved the business back to this building after his original store and contents were destroyed by fire. His wife, Dora Bray, and his children, George Bray, Jr. and Evelyn Lease Bray, ran the business after his death in 1949. In 1983, the family sold the business to Walter Toole and Patti Toole. A year later, they joined the Ace Hardware franchise, and in 1987, they moved the business into a larger space on South Dillard Street. Since then, the space has been home to a number of restaurants. This building is known as the longest store in Winter Garden at only 20 feet wide and 177 feet long. At the time that this photograph was taken, the building was home to the Sweet Traditions French Bakery & Cafe.

Copyright to this resource is held by the Winter Garden Heritage Foundation and is provided here by RICHES of Central Florida for educational purposes only. 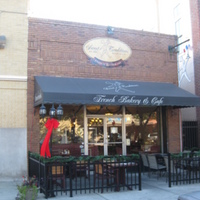