This particular portion of the painting features the Thomas Building, which was an arcade that included several stores. The building was located at the intersection of Church Street and Magnolia Avenue, with a street address of 100 East Church Street in Downtown Orlando, Florida. Magnolia was previously called Main Street until the mid-1900s. Most of the block was occupied with small shops, such as Cervantes Spanish Restaurant, Family Loan Company, Roger Reality Company, and other shops. Slightly larger businesses such as the Astor Hotel, later the Bass Hotel, also existed on the block. The building was torn down and a new building was constructed in the late 1950s and demolished in the early 1960s. The Thomas Building was also sometimes referred to as the Church and Main Arcade. This lot, as well as the rest of the block, was later replaced by the CNA Tower and Barnett Plaza. 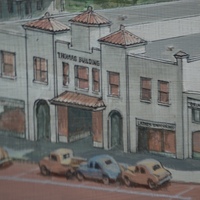