A photographic postcard of the Masonic Temple, located on 205 East Central Boulevard in Orlando, Florida. The building was constructed in the 20th Century Commercial style in 1925 and was dedicated on January 13, 1926. The original owner was the Free and Associated Masons of Orlando from 1926 until 1982. The building was purchased in 1982 for $660,000 and underwent extensive modifications, including an additional two stories. The building now serves as professional offices.

The First Unitarian Church of Orlando's Unity Chapel, located at 1 North Rosalind Avenue in Downtown Orlando, Florida, can be seen to the far left of the postcard. On January 8, 1911, a congregation of Universalist Unitarians, lead by Reverend Eleanor Gordon, formed in the home of Caroline Groninger Gore, the second wife of former Mayor Mahlon Gore, which was located at 211 Lucerne Circle. The church was formally organized the following year in the home of Edward McNeill, located at 309 Robinson Street. The congregation held some of its earliest services in the Lucerne Theatre before holding its first service at Unity Chapel on February 16, 1913. Unity Chapel was designed by architects Ida Annah Ryan and Isabel Roberts in the Spanish Colonial Revival-style. The chapel was dedicated on March 16. By 1954, the congregation had outgrown Unity Chapel and moved to a new church located at 1901 East Robinson Street. In 1957, the chapel's last service took place. Sam Murrell constructed a new building, called the Murrell Building, that was designed by Richard Boone Rogers in 1957. 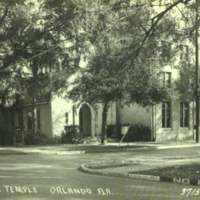