The Naval Air Station (NAS) Sanford was commissioned on November 3, 1942 as a naval aviation training facility during World War II. The Navy continued to train pilots at NAS Sanford throughout the Korean and Vietnam Wars. NAS Sanford was temporarily decommissioned after World War II in 1946 and then recommissioned as the Naval Auxiliary Air Station (NAAS) Sanford in 1950 due to the outbreak of the Korean War and the ongoing Cold War. Soon afterward, the station was renamed NAS Sanford and redesignated as a full naval air station. On February 6, 1959, NAS Sanford was dedicated as Ramey Field in honor of Lieutenant Commander Robert W. Ramey. In 1968, due to lack of funding caused by the Vietnam War, Congress directed the closure of NAS Sanford. The City of Sanford assumed authority over the former NAS Sanford facility the year after it closed and renamed it the Sanford Airport, which was managed by Commander J. S. "Red" Cleveland. The airport underwent various name changes over the next several decades: Sanford Regional Airport, Central Florida Regional Airport, Orlando-Sanford Regional Airport, and its current name, Orlando-Sanford International Airport. Throughout the 1980s and 1990s, several Naval buildings were demolished and new buildings were constructed.

Originally created by Adam Rock and owned by RICHES of Central Florida.

In November 1942, NAS Sanford was commissioned to meet the need for additional naval aviation training facilities. Originally planned for bomber training, within a year it converted to fighter plane training. A major portion of fighter pilots that served on aircraft carriers in the Pacific during WWII trained at this field. "Touch and Go" training simulated aircraft landings at the airfield at Osceola and other nearby fields. Fifty three pilots lost their lives in plane crashes in the surrounding area during this time.
At the end of WWII, the airfield was decommissioned and turned over to the city. In 1947, the NY Giants constructed eight baseball fields for their spring farm teams. Other activities using the facilities included apartments, motels, a seminary, a Bible college and the county hospital in the old dispensary.
(Continued on other side)

NAVAL AIR STATION-SANFORD
(Continued from other side)

In 1951, with the start of the Korean War, the air station was reactivated. Its mission changed several times, but it always supported fleet carrier aircraft.This time training and refresher courses were given to both reserves and experienced pilots.

NAS Sanford in 1957, was one of the first to receive a squadron of A3D Skywarriors, a long-range jet bombers. In the 1960's these were replaced by the Vigilante. Originally designed as a nuclear bomber, the aircraft later was used for photographic reconnaissance missions. During the Vietnam War, Sanford was home to the families of many POWS and MIAS from Vigilante squadrons.

In 1968 Congress closed the base and returned the airport back to the city. This caused a major economic set back to the area. Slowly the area and the airport recovered, thus bringing international flights to Sanford. 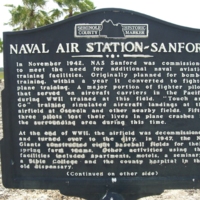 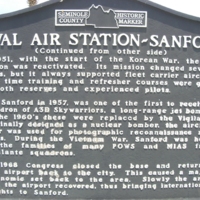