Part of a newspaper article from the The Tampa Times describing the victory of The Tropics, a Tampa-based band, at the International Battle of the Bands. The headline reads, "Tropics Win International Prize," and was written by Nancy Trice and Carole Newman. According to the article, The Tropics played "I'm a Man," "Misirloo," and "Black-Jacket Woman." The band one new equipment from Ludwig Drum Company, recognition as the house band for WLS Radio for one year, and the opportunity to perform with The Mamas and The Papas in Chicago on August 20th. 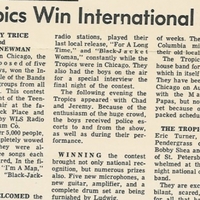