An agreement to establish the Oklawaha River Basin Improvement Council, formed from a proposal by U.S. Representatives Lou Frey, Jr. (b. 1934), Don Fuqua (b. 1933), and William V. Chappell, Jr. (1922-1989). The agreement outlines the environmental issues facing the Ocklawaha River Basin and details the organization of the council, its goals, powers, and funding.

The Oklawaha River Basin Improvement Council was formed on April 21, 1972, consisting of members representing Orange County, Lake County, Marion County, and Putnam County, as well as representatives of state agencies, such as the Florida Department of Air and Water Pollution Control. The council was formed to coordinate planning of environmental restoration at a regional level under the Florida Inter-Local Cooperation Act of 1969, which allowed city, county, and state agencies to coordinate with each other on mutually beneficial projects. The council’s primary project was a proposed drawdown of Lake Apopka, which was heavily polluted due to agricultural and sewage run-off by the 1970s. The drawdown would entail completely or mostly draining the lake, discharging the water downstream into the lakes and rivers that constitute the Ocklawaha River Basin, allowing Lake Apopka’s bottom sediments to consolidate, in the hope that this would improve Lake Apopka’s water quality. The council applied for several federal grants seeking funding for this project. 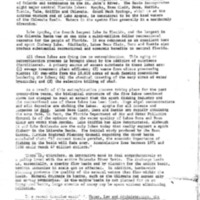