The Cher-O-Key, the bimonthly school newspaper published by the Journalism Club of Cherokee Junior High School, which was located at 550 South Eola Drive in Orlando, Florida when it opened in 1927.

The Volume I, Number 7 edition was published on March 8, 1929 and cost one cent. Articles in the newspaper include awards that the school one at the Central Florida Exhibition, a new picture file in the school library, a ninth grade debate, a perfomance by the Hi-Y Club, student editorials, a calendar of event, exchanges with other schools' newspapers, Thelma Jones' contest-winning limerick, club news, a short story about two West Virginian slaves during the American Civil War, personal news from teachers, sports news, and a humor section.

Digital reproduction of original school newspaper by Robert Cox, ed.: The Cher-O-Key Vol. I No. 6. March 8, 1929

Originally edited by Robert Cox and published by the Journalism Club of Cherokee Junior High School.

The Cher-O-Key
Published Bi-Weekly by the Journalism Club of Cherokee Junior High School.
Vol.1, No. 7 March 8, 1929 One Cent
CHEROKEE WINS HONORS
Cherokee returned with flying colors from the school exhibits at the Central Florida Exposition. The school distinguished itself by winning 100 ribbons, a notable honor in itself, and additional honors came, however, when the school was presented five dollars for having the best all-round art exhibit on display.
The ribbons won by the various department of the school were as follows.
In athletics, the boys took eight first places and one third; girls took five first places and one third,
In manual arts, three first ribbons and two second,
In practical arts, five first places and four second.
In home economics, eight first and seven second places.
In the printing department, two first places, Cherokee was judged to have the best printing exhibit of any school.
In the art department twenty eight first places and twenty six second.

9-5 AND 9-3 DEBATE
An interesting match of wits between 9-5 and 9-3 debating teams took place at Auditorium period Wednesday, March 6. The weighty question under discussion was "Resolved that the cafeteria is more important to the school than the library." The affirmative was upheld by Shan Kazarosian, Creola Keith and Sammie Bethea of 9-3; the negative by Ed Blankner, Clinton Minter and Gloria White of 9-5. The judges decided by a 2 to 1 vote in favor of the library.

NEW PICTURE FILE IN LIBRARY
Some valuable new additions have been made in our library. Mrs Meyer has recently completed a new file, which consists of collection of pictures. The pictures include prints of the masterpieces of paintings from all countries, pictures of historical scenes, of American and British authors, of homes, of famous men, of musicians. etc. These pictures will be invaluable as illustrative material in many departments. They can be removed from the file by teachers only.

HUMOR
Harry Price: What did I learn in school to-day, Miss Wayland?
Miss Wayland: Why do you ask, Наггу?
Harry: They'll want to know at home.
___________
Miss Brown: Why did George Washington throw the dollar across the Potomac River, Robert?
Robert Lanter: To teach his Scotch soldiers to swim.
___________
Mrs. Meyer: Margaret, how could you tell Hazel she is stupid? Go tell her you are sorry, Margaret Russell: Please, Hazel, I am sorry you are stupid.
___________
Bee careful
You never hear the bee complain,
Nor hear it weep and wail,
But if it wish it can unfold,
A very painful tail.---Goblin.
___________
It Just Can't Be!
A Scotchman was leaving on a business trip, and he called back as he was leaving.
"Goodbye all, and dinna forget to tak'little Donal's glasses off when he isna lookin, at anything."---FX.
___________
Exacting Lady: "I want you to send me over a ton of coal that hasn't any ash or clinkers—and without that sulphurous smell."
Coal Dealer: Lady, you don't want a ton of coal. You want to get connected with a gas meter.”---Ex.
___________

It will be appreciated if students who have suitable pictures will bring them to the librarian, who will mount them and place them on file. In this way the file can be made more nearly complete.
There are also newspaper racks and shelves for professional Magazines which are recent acquisitions to the library.

HI-Y-ENTERTAINS
The Hi-Y club of Cherokee put on a very clever and impressive program in auditorium on February 27. Several successive tableaux were shown purporting to portray the relation that should exist between father and son. Burwell Howard acted as interlocutor.
The Hi-y club is composed of many outstanding boys in the school, the aims of the club being to create friendship among students, to build leadership and character and to maintain a clean Christian spirit. The club under the leadership of Mr. Thompson is doing very illuminative work.

EDITORIALS
March, the "windy month" that ushers in the spring, is here, Its name, which has come down from ancient times, was given in honor of the war god Mars. The vernal equinox, which marks the beginning of spring, falls on the twenty-first, and the month is thus partly winter and spring. How many of us in Florida would agree that March is partly a winter month?
There have been a number of superstititions connected with March, quite without foundation. One, which is still quoted, concerns the weather. "If March comes in like a lion," the saying is, “it will go out like a lamb; If, on the other hind, the first dry on March is balmy and "lamblike," the last day is certain to be stormy. An other old saying declares that the last three days are borrowed from April, while a third calls the first three "blind day" and declares them to be unlucky. It is not so very long ago that farmers held so firmly to this belief that they would not plant seeds on those days.
The special gem of the month is the bloodstone, and the special flower, the violet.

EXCHANGE
The staff of the "Cher-O-Key" has long wished to pay tribute to the "Memorial Echo,” published by students of the Memorial Junior High School. We appreciate also the publicity it has given to activities at Cherokee.
The "Cher-O-Key" also exchanges with the Ocala Junior High School, whose students publish a live page mimeographed paper. We like the cuts and cartoons which adorn every page.
We have enjoyed looking over "The Pennant”, published by the Lebanon, Indiana, high school. “The Pennant" is a full sized newspaper with one section devoted to junior high school

THE LIMERICK
Thelma Jones, of section 7-2, won the limerick contest sponsored by the "Cher-O-Key" and will receive a copy of each issue free. The winning limerick goes thus:
We should take the Cher-O-Key;
This paper is the school's, you see.
It I must support
And be a good sport
Then the greatest paper will be from
Cherokee.

PERSONAL
Miss Brown spent last week-end in Clearwater.
__________
Miss Scruggs has had visitors from North Carolina for the past week.
__________
Miss Mitchell went to Tampa last week.
__________
Miss Henderson spent the week-end of Feb. 22 in Atanta, Georgia.
__________
Food Settles the Question
__________
Just before the war between the States two negroes who lived on a rich plantation in West Virginia, a state uncertain whether to pull away rrom the Union or not, were heard in the following conversation.
"Rastus, Ise gwin to tell yo de fragments ob ny min”. Ise been thinkin ober dis here question ob slavery what de Marsa's done been conversation and aw thinks aw sides wid de Union. Aw don believe de states has de right to disjine."
Rastus, who had been standing in the background, then spoke up.
"Mose, nigger, you am entirely wrong. Ise sided wid disjining from de Union as ma Marsa done done and aw thinks if anybody done go and do de right thing Old Marse sho will do it. If dese here states what am hot wid de questions wants to disjine, and, nigger, I disjine wid im for I sides wid ma master”.
“Rastus, Iubs my massa, but dis here nigger sides for a good Union. I has been under Marsa as slave for years, - well, dat is since I was a boy, and Ise tired of bein bossed aгound, I wants to be free to do what I wants, and lib like I wants to
Rastus than said: “Mose, we two niggers am growing old an grey. We aint gwine to last much longer but I tells you what we'll do."
Instead of continuing the argument the two negroes fell two their knees.
"Mose, you can lead in prayar and ask the dear Lawd to help and forgive dese two sinful niggers."
Rastus began; "Dear Lawd, what done gone and delivered us out of de land of Canaan and de land of de Jordan, Help dese two niggers what am hot on de question of slavery. Settle our mistaken minds. Amen."
Just then from out of the distance came the sound of the supper gong ringing.
Rastus jumped up on his old weak legs and shouted: "Yan can dan argue all yo wants to, nigger, Aw guess you wins for when aw hears dat peal from de distance I gets awful greeable.
________
1,632 students attended the University of Florida summer school last summer. 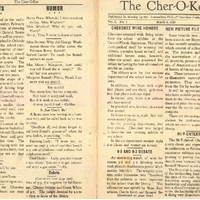