The gray building on the right is the McEwan Clinic, located at 100 East Central Boulevard, which was constructed in 1911. The original owner was Dr. John Singer McEwan. The building was designed to be Orlando's first public hospital. A third story was added circa 1920 to make a total of twenty hospital rooms. Apart from being a hospital and clinic, it was also the Florida Public Service Corporation, later the office of the Florida Gas Company, clothing stores (Artistry), and a 7-Eleven. As of 2011, it is the Central Station Bar. Across the Main Street from the Courthouse is the Orlando Lawn Bowling Clubs grounds.

Copyright to this resource is held by C. T. American Art and is provided here by RICHES of Central Florida for educational purposes only.

THIS SPACE FOR WRITING MESSAGES

THIS SPACE FOR ADDRESS ONLY 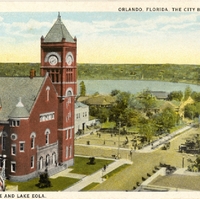