The twentieth issue of the ninth volume of The Watermark was published on September 26, 2002 and continued coverage of Florida politicians running for state and federal legislative seats. This issue highlights the platforms of U.S. House District 13 candidates Katherine Harris (R) (b. 1957) and Jan Schneider (D) (b. 1947). It also features a look into the Hope &
Help Center's annual Headdress Ball benefiting the HIV/AIDS organization, the success of the Out &
Equal Workplace Summit, and a full schedule of the 13th annual Tampa International Gay and Lesbian Film Festival. The issue discusses how various states and countries were voting to protect their LGBTQ+ (Lesbian, Gay, Bisexual, Trans, Queer/Questioning, and others) communities. This included California's domestic partners' inheritance law, South Africa's gay adoption policy, and the continuation of Miami, Florida's Human Rights Ordinance. Other articles include a spotlight on actor, Heath Ledger, and the aspirations of the Tampa International Gay and Lesbian Film Festival's director, Margaret Murray. 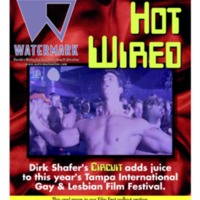