The twenty-first issue of the ninth volume of The Watermark was published on October 10, 2002 and continued to provide coverage of politicians running for state government positions, as the mid-term elections would be held in November. In this issue, the Florida Attorney General race between Charlie Crist (R) (b. 1956) and Buddy Dyer (D) (b. 1958) is examined. The issue also highlights fall events occurring within the LGBTQ+ (Lesbian, Gay, Bisexual, Trans, Queer/Questioning, and others) community, including the Tampa International Gay and Lesbian Film Festival and "Bear Bust." Additionally, this issue covered an LGBTQ+ organization at a Sarasota college, Equality Florida's 2nd Annual Central Florida Reception, Pridefest, and less encouraging incidences of queerphobia. Director of the Gay, Lesbian, Bisexual, Transgender Community Center (aka The Center), Lana Brito, was interviewed, as was an openly gay "Big Brother" of the Big Brother Big Sisters of America chapter in Tampa. A clothing line called Butchwear, pioneered by Alex Brendell, was featured in the Water Colors pullout section. 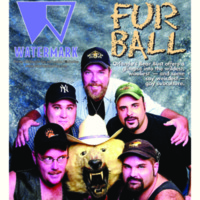