The nineteenth issue of the ninth volume of The Watermark was published on September 12, 2002, primarily highlighting the effect Florida politicians might have on the Central Florida LGBTQ+ (Lesbian, Gay, Bisexual, Trans, Queer/Questioning, and others) community if elected. Among these politicians was Patrick Howell (b. 1970), who, if elected, would have been the first openly gay Republican to sit in the Florida State House of Representatives. Other politicians include Tom Feeney (R) (b. 1958), Speaker of the Florida House of Representatives in 2002, and Harry Jacobs (D) (b. 1958), a newcomer to the political scene but ardently supportive of equal rights and higher wages for teachers. The two would be up for the U.S. House District 24 election that year. In addition to state and federal politics, the issue continues coverage of the debate surrounding the addition of protection from discrimination of sexual orientation in the workplace to Orlando's city legislation. Other topics covered include interviews with comedians touring Florida, a spotlight on an LGBTQ+ youth group, and an interview in the Water Colors pullout section with DC Comics writer Judd Winick, who discusses hate crimes and gay bashing in a recent issue of the Green Lantern. 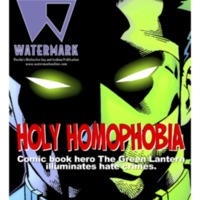