The eleventh issue of the twelfth volume of The Watermark was published on June 2, 2005 and covered a wide range of topics and stories of interest to the LGBTQ+ (Lesbian, Gay, Bisexual, Trans, Queer/Questioning, and others) community. The headline story surrounded the ongoing investigtion of the deaths of two Tampa men, Jason Galehouse (1977-2003) and Michael Wachholtz (1977-2003). Steve Lorenzo and Scott Schweickert, who were arrested in 2005 for the murders, would not be convicted until over a decade later. Also included in this issue was the proposal of a new federal bill that included transgendered people as a protected class, the postponement of WorldPride, and the closing of a local Tampa business. In the Water Colors section, former Christian singers Jason and DeMarco gave an interview. This issue of The Watermark featured spotlights of many famous women who would be entertaining the masses at Gay Days Weekend 2005, the largest annual gathering of LGBTQ+ people in Orlando, as well as a schedule of events. Overall, this issue provided readers with answers, information, and entertainment. 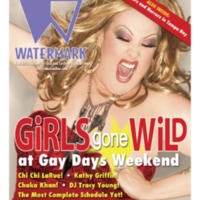