The former site of the State Bank of Orlando, located at 1 North Orange Avenue in Downtown Orlando, Florida, in 2002. The bank was formed in 1893 with Louis Massey as president. In 1919, the State Bank converted into the State Bank and Trust Company and also acquired the northeast corner of Orange Avenue and Central Boulevard that year. A. G. Bentley constructed a ten-story building on that lot, designed by W.L. Stoddart in the 20th Century Commercial style with Neo-Classical elements. The building was used by the bank until it closed in 1929. In 1933, the Florida Bank at Orlando acquired the property.

In 1927, the building was acquired by Orange County and served as governmental offices, including the Sheriff's Office and Supervisor of Elections. In 2002, it housed the temporary home of Florida Agricultural and Mechanical University's College of Law. 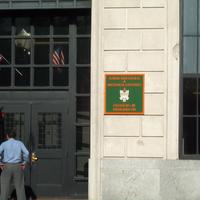