The Fort Gatlin Historic Marker, located near the corner of Summerlin Avenue and Gatlin Avenue in Orlando, Florida, in 2004. Fort Gatlin was a U.S. Army fort established during the Second Seminole Indian War (1835-1842) on November 9, 1838, in Mosquito County, Florida. The fort was named in honor of Army Assistant Surgeon John S. Gatlin (1806-1835), a casualty of the Dade Massacre in 1835. The fort's location overlooked three lakes and was frequented by Seminole warriors led by King Philip, the Seminole Chief, and his son, Coacoochee.

The fort was active until the Army withdrew from the area in 1849. A number of soldiers and their families settled in the area to grow citrus and raise cattle. In 1856, Fort Gatlin became the county seat for Orange County, formerly part of Mosquito County. The community changed the name to Orlando. In 1941, the U.S. Navy established the Underwater Sound Research Laboratory on Lake Gem Mary. The laboratory was closed in 1997.

On November 9, 1838, during the Second Seminole Indian War (1835-42), the U. S. Army established Fort Gatlin in Mosquito County. This fort was named for Army Assistant Surgeon John S. Gatlin (1806-1835), who was killed in the Dade Massacre in 1835. The site of the fort was chosen as a military outpost due to its strategic position overlooking three lakes and because the area was frequented by Native Americans led by Seminole Chief King Philip and his son Coacoochee. The Fort served the state militia during the war until the Army withdrew in 1849. A few soldiers and families remained in the area, growing citrus and raising cattle. In 1856, Fort Gatlin became the county seat of Orange County, created from Mosquito County in 1845. The community's name was later changed to Orlando, a name attributed to militiaman Orlando Reeves, who was reportedly killed in a skirmish during the Second Seminole War. It is believed that Reeves is buried near the site of Fort Gatlin. In 1941, during World War II, the United States Navy established the Underwater Sound Research Laboratory near this site on Lake Gem Mary because of the great depth of the lake. The lab was closed in 1997. 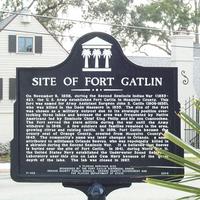