In 1924, the current brick building was constructed by the J. C. Hanner Construction Company. The originally pressed metal ceiling, the mezzanine, and the tile awning of the second floor fade have been preserved from the original Orlando Hotel. The building was briefly occupied by a clothing store owned by Nat and Pauline Berman, who later sold it to Ben and Sam Arstein. In 1950, the building was purchased by the Belk-Lindsey Company. In 1973, Steve Fuller and Bob Snow purchased the property to begin the development of Church Street Station. The following year, it was transformed into the Rosie O'Grady's Goodtime Emporium. 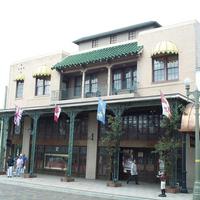