A painting by Bettye Reagan, a local artist in Central Florida, inspired by a photograph of the Lawton General Store Oviedo, Florida sometime between 1900 and 1939. The store was run by two brothers: Thomas Willington Lawton (1882-1963) and Winborn Joseph Lawton, Sr. (1881-1971).

T. W. Lawton graduated from Rollins College in 1903. He later received his master's degree from Andover Newton College in Boston, Massachusetts. Following college, Lawton returned to Oviedo, where he married Charlotte "Lottie" Lee (1887-1984) and served as the principal of the Oviedo School from 1905 to 1907. In 1916, he became the first elected Superintendent of Schools of Seminole County. He held that post until 1952 and passed away 11 years later in 1963. Lawton Elementary School is named in his honor.

W. J. Lawton, Sr. served as a trustee of the First Baptist Church of Oviedo, as well as a secretary and treasurer for the church's Sunday school. He graduated from Mercer University in Macon, Georgia, in 1900. Lawton married Lillian Della Lee (ca. 1883-1977) and had four children: Elizabeth Lawton Laney, Kathryn Lawton, John. K. Lawton, and Winborn Joseph Lawton, Jr. Lawton was in the mercantile business, worked as an insurance agent, and grew citrus.

Copyright to this resource is held by Bettye Reagan and is provided here by RICHES of Central Florida for educational purposes only. 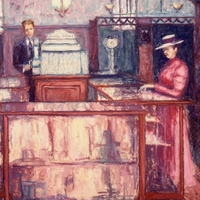