The Cher-O-Key, the bimonthly school newspaper published by the Journalism Club of Cherokee Junior High School, which was located at 550 South Eola Drive in Orlando, Florida when it opened in 1927. The Volume I, Number 4 edition was published on December 21, 1928 and cost one cent. Articles in the newspaper include the performance of the musical "Once in a Blue Moon", the Red Cross' Christmas Seal Campaign, student scholarship, club news, a calendar of events, several Christmas poems and stories, seventh grade literature, and Cherokee Junior High's defeat by Memorial High School in a soccer game.

Digital reproduction of original school newspaper by Ruth Wetherington, ed.: The Cher-O-Key Vol. I No. 4. December 21, 1928.

Sports
Memorial defeated Cherokee at soccer last Friday in the first of a series or inter-school games, by a margin of 4 to 1. Cherokee was handicapped in that three of her team were ineligible and she played six men against Memorial's nine. However, the game was played in good spirit between the two schools, and Cherokee commends the spirit of her team.

Christmas Eve
(Continued from page three)
again, I'll stay here.
Billie. All right. Goodby.
(He walks swiftly from the stage.)
Several minutes later he returns.
Billie: Betty! Betty! See. I've sold a my papers.
Betty: Yes, but let's stay here tonight. I'm too cold to move, and somehow it's more cheerful than the attic. (They sit down and go to sleep with their arms around each other. A soft voice is heard singing a Christmas carol. Christmas Spirit enters.)
Christmas Spirit: poor children. Tonight will be the last night they will be in earthly pain.
(The children open their eyes.)
Betty and Billie: Mother--- We hear you calling to us. What a glorious Christmas it's going to be; (They lie back with closed eyes, while the angel glides softly from the stage singing a coral.)
Where, Oh, Where
Officer: “You were making fortyfive. I'll have to pinch you---”
Martha: "Oh, if you must, please do it where it won't show!---Ex.
HUMOR
Miss Datson:Name a famous general.
J. C. S.Mathers: General Motors.
“Say, did you know Billy Berst?"
“No did he?”
Dere santy claws:
i am a have tried to be a good principal. My name is glen thompson. I do not want much for myself i wood like a choo-choo train and a little bow-wow. please give the janitor a kitty sa he can throw it out of the window some more. Plese, sannty claws, Mr Myer is al- ways satisfied but bring him something anyway. Plez give Mrs. Myers a mother goose hook. Miss Seegel would pleze like a pencil and some pink cards. Miss Brown wood like a horn so she can meke a noize. Miss Ford wood like a new lizzie. I wish you wood give Mis glace some more paint and Mis Scruggs a new lipstick. Mrs Walker needs a new coat. She has one but it is so thin that she must nearly freeze,
Plese give Mis Ekles a new unbreakable thermometer. Mr. Write needs a rubber ball so he can play out boors and build up musel. Mr. Hammond and Mr. smith want a hammer and some nails Pleze give Mis Ludwig a dress. She needs it terribly as she only has a pair of bloomers.
yore frend glen [sic]
(Continued from page 1)
Sally Fletcher, Maxime Mizelle, Lester Barlow, Richard Anderson, Ted Peterson, Jack Kline, Ed Blankner Burnett Bartlett, Shan Kazorarosian Gladys Cassee.

The Cher-O'Key
Published Bi-Weekly by the Journalism Club of Cherokee Junior High school.
Vol. 1, No. 4 December,21, 1928 One Cent


Merry Xmas
“Once in a Blue Moon" to be Presented Tonight
It's here! The great musical event of the season will be staged tonight. Students have heard “Once in a Blue Moon" discussed so much that they will not want to miss the chance of seeing it.
Those who have witnessed preliminary performances bear reports of a delightful entertainment, brim full of comedy, sparkling with romance, tingling with mystery, which is interspersed with brilliant choruses and solos. The setting is said to be both gorgeous and picturesque.
[Illegible] ters around the theme of a young man, George Taylor, who substitutes for a college friend of his at a week-end party. While there, he falls in love with Silvia, his chum's boyhood sweetheart. One night during a dance a robery [sic] takes place. Suspicion turned on George who is forced to disclose his identity. Things look dark for him until—well, the end is too good to disclose. Come and see it.
The all-star cast including such celebrities as Emily Hopkins, Mary Terhune, RobertaBarnett, Bina Joe Pickron, Jack Ferrell, [sic]

Christmas Seal Campaign
All over the United States there is being conducted the annual Christmas Seal Campaign, by the Red Cross. Last year Cherokee won the prize for selling the most seals of any school in Orange County. Students are hard at work again this year and Cherokee hopes to win again. The prize this time will be something amounting to sixty dollars, or perhaps that amount in cash, instead of the usual prize of a pair of scales.
Present indications show that we have a good chance to win again this year. At least, we hope to beat the record of $150, which we set last year.

Nearly two thousand years ago, on the first Christmas Eve, the holy Star of Bethlehem gleamed as the symbol of the sublime event in history watching and waiting that night those Three wise Men of the East had Faith in their hearts. Faith serene and invincible.
Every worthwhile human achievement since has been in some measure based upon Faith. The professional man, the captain of finance and industry, the artist,the craftsman at his task --all need Faith to carry on successfully.
Thus the true spirit of the Christmas Season is evidenced best by the expression of Faith in our fellow-men, and in the worthwhile things which have helped in our development.
Merry Christmas
(Edna Yacobian,7-7)
“Merry Christmas, everybody!"
Someone's yelling, feeling gay
“Santa's been to visit me,
Let's all be happy this day.”
“Look at your presents everyone”
And in your stocking too--
For if you had what I now have
You surely wouldn’t be blue.

7th Grade Makes Literature
Can Junior High School students makes literature? This is a question that challenges thought and has long been a topic of discussion by some of the leading educators of our land. In this issue, we offer you the literary efforts of some of our seventh grade students. Read them and decide this question for yourself. Surely you will agree with us that we have some potential authors, at least.

A Prayer
(Gloria white, 9-5 )
Lord, let me be a little kinder,
Let me be a little blinder
To the faults of my fellow students.
Let me praise a little more.
Let me be, when I am weary
Just a little bit more cheery,
Let me serve a little better
Dear old Cherokee.
When temptation bid me waver
Let me strive a little harder
To be all that I should be.
Let me think more of my neighbor
And a little less of me.

Be merry, folks, ‘cause Christmas comes
But only once a year,
And when it comes it brings us all
Gladness, joy and cheer."

Club News
Xmas Eve
Maxine Fugate section 7-7 Characters:
Billie: a little boy of Twilight Alley.
Betty: his sister. Christmas Spirit: the angel of Christmas,
Act 1.
Scene: a barren room in an attic. A box and an old blanket are its only contents.
At the right appear Betty and Billie.
Billie: I don't guess we'll have a very pleasant Christmas this year, Betty.
Betty: No, but I have you to take care of.
Billie. And I have you.
(By this time time Betty and Billie are seated side by side on the box.)
Betty: I tell you! Lets go out and sing some of those Christmas carols Miss Alice taught us!
Billie: Well-but what about my papers?
Betty: That's just it! We can sing as the people pass and maybe more people will buy a paper.
Billie: All right, we can try. Let's go.
Act 2
Scene: A windswept corner of the alloy. Betty and Billie are standing on the corner. Billie is trying to sell his papers to the few passers.
Billie: Nobody seems to want a paper.
Betty: No, and I'm getting cold she
sits down.) Go on away and try
(Continued on page four)
Personal
The city of Bradenton has issued in the sum of $25,000 for the erection of a new school building.
What Would Happen?
If Mr. Tompson should fail to make an announcement in autitorium [sic]?
If Miss Jones should put her hair up?
If discipline cards should give out?
1,632 students attended the University of Florida summer school last summer.
Mary's Child is Gently Sleeping
Maxime Fugate, 7-7
Mary's Child is gently sleeping.
Mary's kneeling by his side,
Joseph keeps watch by the doorway,
When within three wisemen glide.
As the wise men kneel before Him,
The Child's blue eyes open wide,
And, with a smile of wonderous [sic] beauty
He seems to bless those by His side,
As upon that Christmas evening,
The birth of our Christmas day.
The Christ Child will bless us forever,
And take our sins away.
Mary's Child is gently sleeping
In His Fathers home above,
But He is a Child no longer,
He's the Savior we all love. 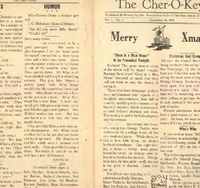