The Cher-O-Key, the bimonthly school newspaper published by the Journalism Club of Cherokee Junior High School, which was located at 550 South Eola Drive in Orlando, Florida when it opened in 1927. The Volume I, Number 5 edition was published on February 1, 1929 and cost one cent. Articles in the newspaper include Thrift Week, a speech by Dr. J. Dean Adcock of the First Baptist Church, Student Council's visit to the Orlando Municipal Auditorium, the theatrical production "The Family Album", student editorials, a calendar of events, Cherokee Junior High's Bookbinding Department, the Expression Club's theatrical productions, the activities of the Margaret F. S. Flace's art class, personal news from students, sports news, the school's new projection lantern, and students from local Orlando elementary schools who were promoted to junior high school.

Sports
Syort News
Last Wednesday, January 23, during auditorium period the boys of 9-4 were awarded the school letter “C”, for being school champions in Soccer. This is one of the athletic awards given every year by the school. These boys represented Cherokee in the tournament detween[sic] Cherokee and Memorial, but due to the fact that two of the boys were ineligible, the team lost to Memorial. The boys’ receiving letters were: Champ Williams (captain) Maurice Harding, Thomas Nickels, Roy Cason, Herbert Kasper. Earl Peppercorn, Edward Pudlinski.

Basketball
In Gym, Coach Wright has been working hard teaching the boys the fundamentals of basketball which consists of passing, catching, shooting, dribbling, pivoting and team work[sic].
At the beginning of the second semester a round robin between eligible boy's home-room teams will begin. The winning team of each grade will then play for the school championship. The fight is on!

Volleyball
The girls of 9-2 were also presented with the letter "C" last Wednesday, for winning the girls school champion. ship in volleyball. The girls are also city champions, having defeated Memorial. . This is an accomplishment in which the entire school takes pride. The girls are: Helen Arendt, Roberta Barnett, Irene Caldwell, Octavia cha. bot, Lillian Reynolds Mildred wade.
Section 8-4 was the winning eighth grade team in volleyball, and 7-1 was winner in the seventh grade.
The basketball season for girls is now open.

Humor
Visitor: Billy, what is that noise going on upstairs?
Billy Tyree: Oh, that's mother dragging Dad's pants over the floor.
Visitor: Well how could that make such a noise?
Billy; well, you see, Father is in them.
Carolyn McKinnon: over in my country, my brother was killed by a revolving crane.
Takooby Topakian: My! What ferocious birds you have in America!

New Lantern Proves Popular
Cherokee's new projection lantern is being used in many beneficial ways, both in the auditorium and in the classroom. With zoo of the 6cosides, which complete the set, already on hand, it is expected that much will be accomplished through the medium of visual instruction. The slides can be used as illustrative material with all courses in the school. The students are grateful for the acquisition and hope to prove to higher authorities that the investment was a wise one.

Accelerated Students Here
Among the new students in Chero. kee are several who have been accelerated facm the Orlando Elementary Schools. These students while of sixth grade age are capable of seventh grade work, and have been promoted. All Cherokee will be interested to watch their progress. They are Morton Levy, Fred Mauer, John Adams from Concord; James Everett from Grand Avenue. Ruth Stout, George Boss, Juanita Dasher and Hazel Brady from West Central.

The Cher-O-Key
Published Bi-Weekly by the Journalism Club of Cherokee Junior High School.
Vol. 1, No. 5 February 1, 1929 One Cent

Thrift Week Observed
Cherokee entered into the national celebration of “Thrift week” in a whole hearted fashion. Cherokee's own program began a day earlier than the date set for the national observance. Mr. w. R. O'Neal, President of the First National Bank, spoke in auditorium on January 16 on the subject of Thrift.
Later in the week students wrote as a part of their English requirements a paper on Thrift. The best of these, in the form of poems, essays and stories were submitted to judges. The three best submitted by boys and the three best by girls have received cash prizes.
The girls receiving prizes were: first prize, Mary Terhune: second, Gene. vieve Condry; third, virginia Boguer. eif. The boys' prizes went to Lloyd George, first; Joe Bird, second; third, Frank Jacobson.

Dr. Ancock speaks
On Wednesday, January 9, the first
auditorium gathering of the year, Dr. J. Dean Adcock, pastor of the First Baptist Church, gave a talk on the three elements of success in any line. The talk was in the nature of a new year's message and its purpose was to give inspiration to the students to begin aright their work of another year. “The three C's which one must have to succeed”, he said, “are conviction: courage and capacity.” Watch the bullet in during February The Student Council has a surprise.

Student Council Visits Auditorium
The Student Council of Cherokee recently paid a visit to the oriando Municipal Auditorium at the invita. tion of Parson Webb. The council was shown the diferent parts of the organ there.
The group was first taken down to the cellor where they were shown the motors that furush the power for the organ. Next they visited the rooms upstairs where the pipes of the organ are situated. Some of the pipes were larger and taller than a man and some as small as a little finger. The organ was played while the Council was in the small space around the pipes.
Mr. Webb told the group that this is one of the largest and finest organs in this part of the South. It was pur. chased by the city of Orlando for $40, 000. The Council agrees that it is a wonderful organ and wishes that the whole school might see it.

Editorial Board
Editor-in-chief Ruth Wetherington
Associate Editor Robert Cox
News Editors Jean Pettay
Takoohy Topakian
Society Editor Martha Ruth Rathburn
Literary Editor Robert Boggs
Feature Editor Carolyn McKinnon
Sport Editor Charles Rinehart
Joke Editor Richard Marriman
Circulation Donald Young
Faculty Sponsor Miss Henderson
Exchange Editor Bob Williams
Editorials
Students, what does a new semester mean to you? Merely that half a year is over and the thoughts that examinations are things of the past? Or does it also imply a new beginning a time when we should reflect upon our past weaknesses and then turn with courage and determination toward the future?
In the most real sense, the “New Year” for Cherokee began Monday, January 28, we should be grateful for what the coming semester has in store for us, for many good things have been coming our way—a new curtain for the auditorium, a projection lantern for our very own use, new books for the library, awards and prizes of major and minor significance.
Shall we live up to the opportunities thus afforded us? This is what the new semester spells most distinctly— opportunity. Let us then, with firm resolution, seek to strive and do and know, “forgeting the things which are behind and reaching unto those things which are before.
The Mythology Club, of which Mr. Lewis is sponsor, has been reading old Greek and Latin stories and are now reading Scandinavian tales.

Calendar Of Events
Auditorium Feb. 6th, Section o-4, sponsoring Mr. Westover.
100 Books Rebound
The Bookbinding Department of Cherokee Junior High School has recently returned to the Library over ico volumes of books which have been re-bound this year and made as good as new. In addition to the rebinding the department is equipped to label with gold letters these books so that a complete and usable book is put back on the shelves in place of those badly worn or completely dilapidated.
Splendid board back magazine covers with leather laces are made in the binding also. It is estimated that the work of the department including the bindery of the yearly issues several of the best magazines saves the school several hundred dollars each year in addition to the educational and vocational training afforded scores of boys and girls of the community. Our Junior High Schools are among the few of the state to offer such a course and we feel particularly proud of the splendid record established by the high grade work produced.
Miss Bernice C. Datson who has had special training in Colorado State Teacher's college under one of the greatest authorities in the country in this line of work has charge of the Cherokee Bindery Department.
The librarian, Mrs. Meyer, especially appreciates the work of this book bindery since it enables her to keep the shelves meat and attractive with well bound books at all times.

Club News
Expression Club Gives Plays
The Expression Club has had many good plays this year. “His Methodist Foot", and “Kill or Cure”, “The Unexpected Guest,” and “That Troublesome xmas Gift" are some that have been given. At a recent meeting of the club, a play called “Swimming Pool" was given, the cast being entirely of boy. The characters were: The Kid, Sammie Bethea; the Englishman, Harry Price; the Nut, virgil Bankston; the man, Allen Hage; the Sheriff, Jim Siemons. The play centered around the theme of hobo experiences, which were quite diversified. including both robberies and love at fairs. This was voted by the club as one of the best plays of the year.

Art Class Completes Calendar
The special art class, under the direction of Miss Margaret F. S. Glace, has this week completed a project in the nature of a Cherokee calendar for 1929. This is the second annual Cherokee Junior High School calendar The theme used is “History and Growth of Florida." The calendar is done in blue and tan, giving a very artistic effect. The linoleum cuts were designed and executed by the pupils of the Art department.
The printing was done through the co-operation of the printing department, directed by Mr. Arthur P. Lewis,
Students contributing a page or more to this calendar are: Ruth Wetherington, Evedna Murray, Marion Heininger, Gertrude Roe, Lester Trantham,

Personal
It may be interesting to some of us to learn where our friends spent the Christmas holidays.
The time is a bit past but the hu. man interest is still there.
Lois Tyler visited relatives in Tompa during the holidays.
Charles Lee spent the vacation in Daytona.
Charlotte F...ed Mountain Lake during Christmas. ---
Jane Geir and Katherine Lyon spent their vacation in Hollywood, Fla.
Miss Ledford spent the holidays in Plant City, St. Petersburg and Tampa
Among others visiting Tampa during Christmas were Connie Taylor. Thema Jones, Miss Scruggs and Miss Glace.
Temple Carter visited friends in Tallahassee recently.
Arther Tedford and Kingsley Deck. er spent three days at Camp Wewa hunting.
Jane Flournoy spent part of the va. cation with friends in Jacksonville.
Georgia Belle and Alviena Harell were in Fort Meade Christmas.
Eunice and Bernice Phillips visited relatives in Groveland.
Ruth McKinnon was in Plant City Christmas. So was Janet Gould.
Howard Davis, Richard Lawson, Mildred wade, Newell Clark, Billy Tyree, Marion McClelland, Burnett Bartlett. 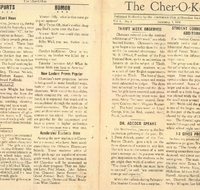