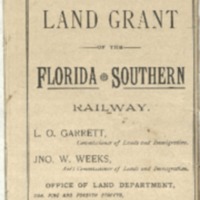 A map of Florida showing the Florida South Railway's land grant, published in 1888. The map includes information about towns along the railway, facts about Florida, and hints for potential immigrants. The Florida Southern Railway was established in… 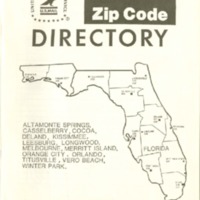 A ZIP code directory for the Central Florida area. This directory was created in June of 1984 and published in November of that same year by the U.S. Postal Service (USPS). The directory explains how to use the dictionary, how to use ZIP codes in… 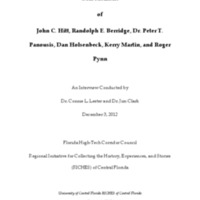 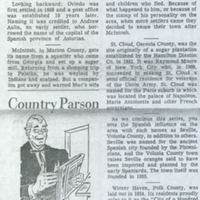 A newspaper article about the origin of the names of various Florida towns. According to the article, Oviedo and Seville after respective cities in Spain. Andrew Aulin, Sr. (1843-1918), the Swedish immigrant credited with naming Oviedo, was appointed…

To Attract, Retain and Grow: The History of the Florida High Tech Corridor Council 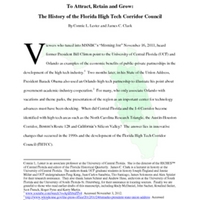 "To Attract, Retain and Grow: The History of the Florida High Tech Corridor Council" is a paper by Dr. Connie L. Lester and Dr. James C. Clark of the University of Central Florida (UCF). Dr. Lester is an Associate Professor of History concentrating… 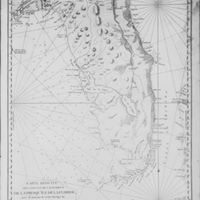 A map of Florida in French from 1780, when the territory was under British rule. In 1763, Spain traded Florida in exchange for Havana, Cuba, which had been captured by the British during the Seven Years' War. Many Spanish settlers and indigenous… 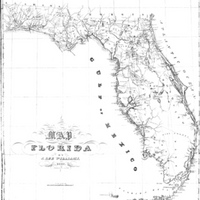 A map of Florida created by J. Lee Williams when the area was a U.S. territory in 1837. Florida came under American control on March 30, 1822, with Tallahassee as its capital. Much of Florida's territorial history is marked by conflict with Seminole… 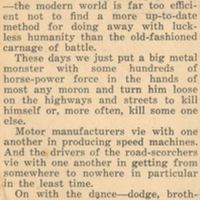 A newspaper article published by The Central Florida Press on June 20, 1930. This article states that automobile accidents in 1929 resulted in 31,000 deaths and one million injuries. At the time that the article was written, steam-powered cars and…

Must Call Doctor if Family is Ill: But A Man Does Not Have to Get Medical Attention for Himself 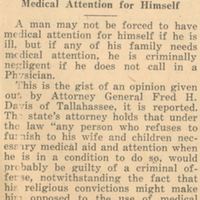 A newspaper article published by The Central Florida Press on June 20, 1930. The article describes a legal opinion provided by Florida Attorney General Fred Henry Davis (1894-1937) regarding Criminal negligence and medical care. According to Davis, a…

Florida is Third in Southern States Education Salaries: Applies Only to Administrative Branch of Educational System 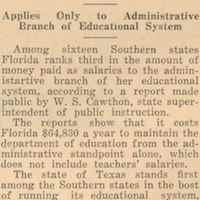 A newspaper article published by The Central Florida Press on June 20, 1930. According to the article, Florida ranked third among 16 Southern states in the amount of money paid as salaries to the administrative branch of the Florida Department of…

Construction is on the Upgrade: Total of $557,725 in Hotel Building 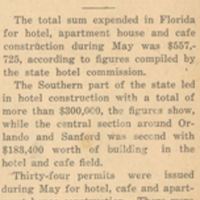 A newspaper article published by The Central Florida Press on June 20, 1930. The article reports construction figures compiled by the state hotel commission for the month of May. According to the article, the total sum of money expended for the… 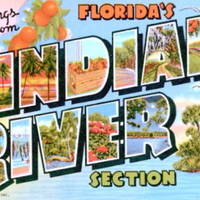 A color postcard featuring the Indian River Section of Florida in 1941. The Indian River is a 121-mile long lagoon running from the Ponce de Leon inlet in New Smyrna Beach to the St. Lucie Inlet in Marion County. The lagoon was originally named Rio…

Florida’s Purge: The Johns Committee Witch Hunt, known colloquially as The Committee, is a short film about the Florida Legislative Investigation Committee's investigation of communism and homosexuality amongst students and faculty at Florida…

Collection of digital images, documents, and other records depicting the history of Florida. Series descriptions are based on special topics, the majority of which students focused their metadata entries around.

Florida was first inhabited by Paleo-Indians as early as 14,000 years ago. By the 16th century, several distinct Native American tribes inhabited present-day Florida, primarily the Apalachee of the Panhandle, the Timucua of North and Central Florida), the Ais of the Central Atlantic Coast, the Tocobaga of the Tampa Bay area, the Calusa of Southwest Florida, and the Tequesta of the Southeast Florida.

In 1513, Juan Ponce de León of Spain became the earliest known European explorer to arrive in Florida. During the 16th, 17th, 18th, and 19th centuries, Spanish, French, and English pioneers settled various parts of the states, though not all settlement were successful. Most of the region was owned by Spain, until it was ceded to the United States via the Adams–Onís Treaty of 1819. On March 3, 1845, Florida earned statehood. Florida was marred by nearly constant warfare with the Native Americans in the region, particularly with the Seminoles during the Seminole Wars.

On January 10, 1861, Florida seceded from the Union and joined the Confederate States of American on January 20th. The state's participation in the Civil War revolved mostly around the transportation of goods via ships.

On June 25, 1868, Florida regained its representation in Congress. During the Reconstruction period, Florida drafted a new state constitution, which included statues that effectively disenfranchised its African-American citizens, as well as many poor white citizens.

Through much of its early history, Florida's economy relied heavily upon agriculture, especially citrus, cattle, sugarcane, tomatoes, and strawberries. Florida's tourism industry developed greatly with the economic prosperity of the 1920s. However, this was halted by devastating hurricanes in the second half of the decade, the Wall Street Crash of 1929, and the Great Depression. The economy would not fully recover until manufacturing was stimulated by World War II. As of 2014, Florida was the third most populous state in the country.