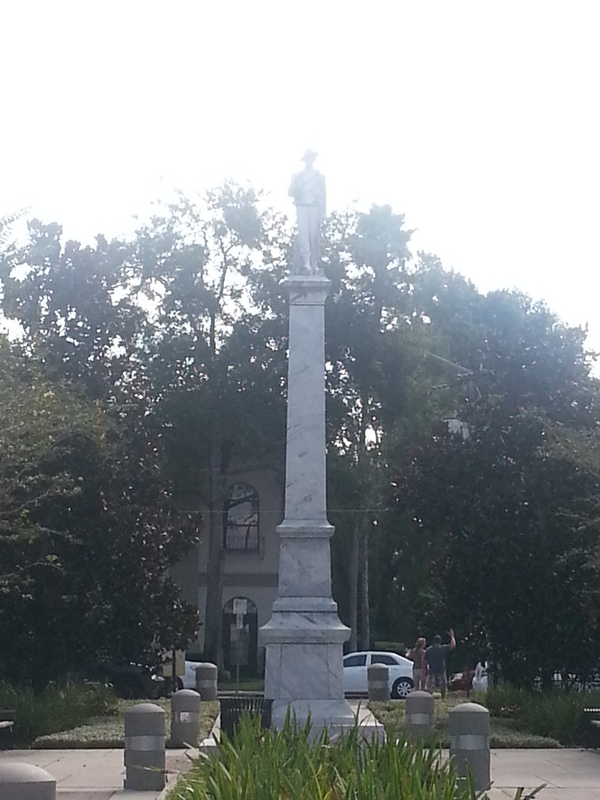 1911 Confederate Soldier Monument on the east side of Lake Eola. 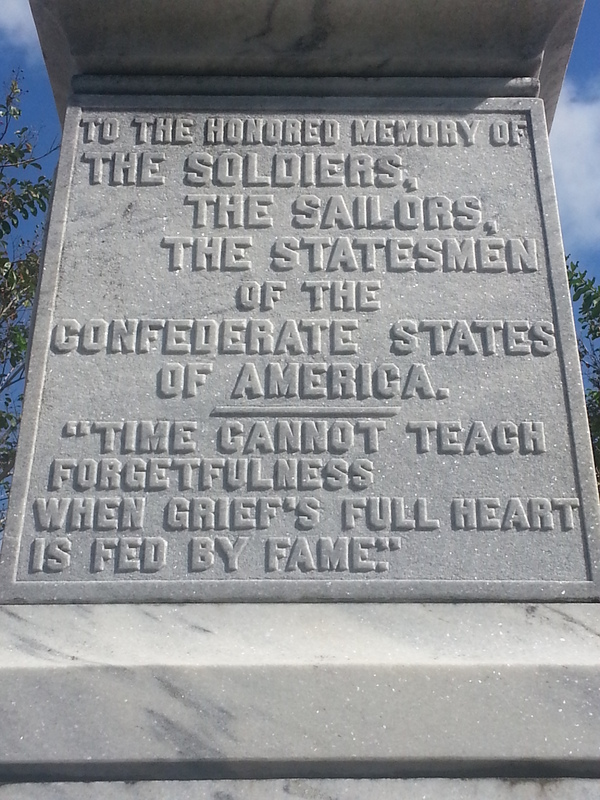 "To The Honored Memory Of The Soldiers, The Sailors, The Statesmen Of The Confederate States Of America. Time Cannot Teach Forgetfulness When Griefs Full Heart Is Fed By Fame." 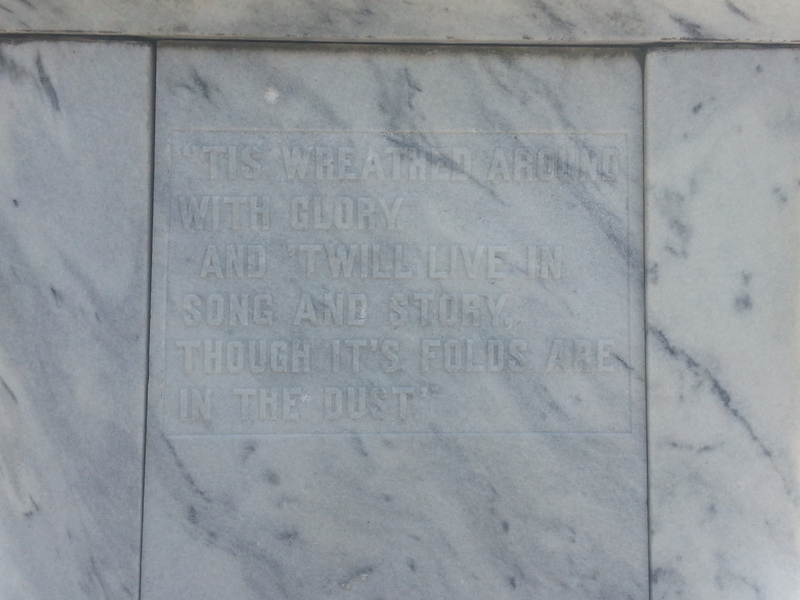 "Tis Wreathed Around With Glory And Twill Live In Sing And Story, Throughout Its Folds Are In The Dust." 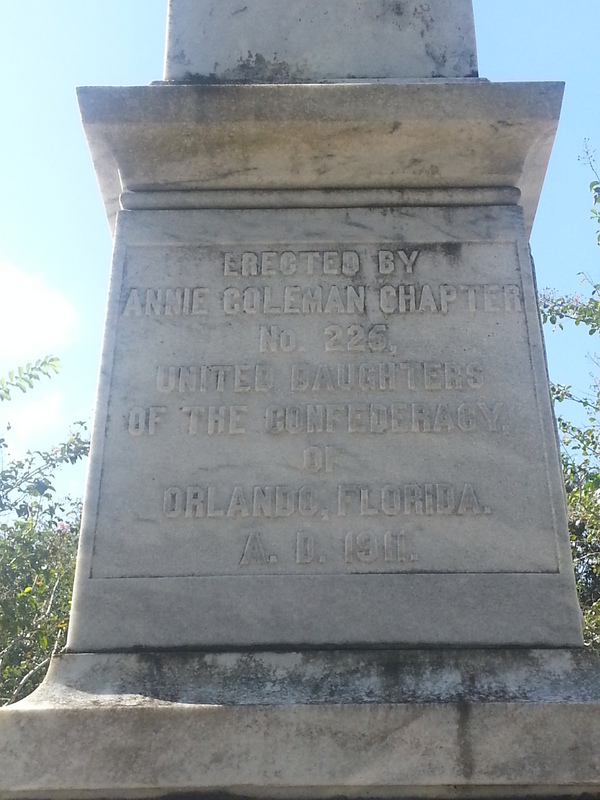 "Erected By The Annie Coleman Chapter No. 225, United Daughters Of The Confederacy Of Orlando, Florida A.D. 1911."" 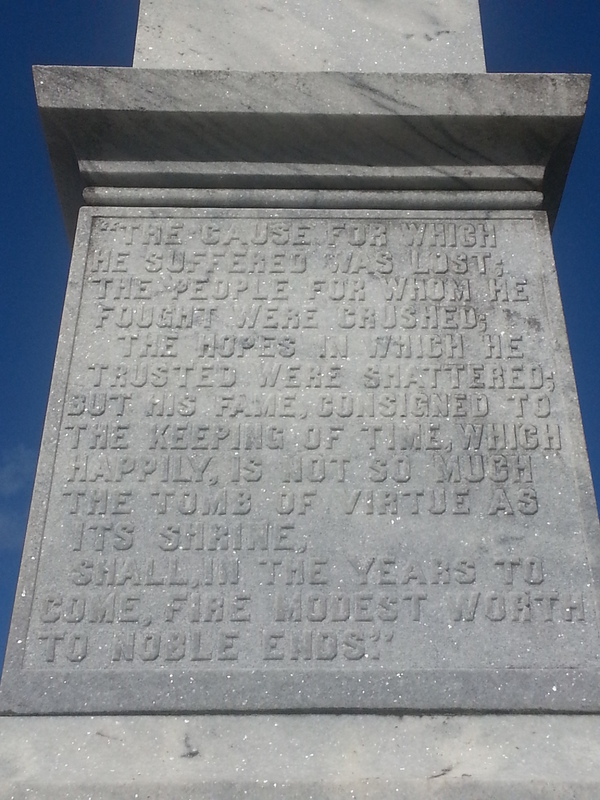 "The Cause For Which He Suffered Was Lost; The People For Whom He Fought Were Crushed; The Hopes In Which He Trusted Were Shattered; But His Fame, Consigned To The Keeping Of Time, Which Happily, Is Not So Much The Tomb Of Virtue As Its Shrine, Shall In The Years To Come, Fire Modest Worth To Noble Ends."

When strolling around Lake Eola there is an array of sculptures and monuments that grab the eye, yet the history of these seemingly benign objects are rarely considered. One monument that has a unique history is the 1911 Confederate Soldier Monument, which overlooks not only Lake Eola but also the ever burgeoning downtown of Orlando.

When looking back at the Civil War, certain states appear as prominent figures such as: Virginia, Massachusetts, South Carolina, Tennessee, and Georgia. One state goes by unnoticed amongst the battles and proclamations, Florida, who seceded the union after South Carolina and Mississippi.[1] It is estimated that 15,000 Floridian men served in the Confederacy and just a little over 1,200 served in the Union.[2] Additionally it is estimated that a minimum of 5,000 Floridian soldiers died while serving.[3] Florida was an extremely valuable asset for the Confederacy, for they were able to provide cattle for the army. [4]  In time, the Union focused on Florida's role in the Confederacy with the goal to start reconstruction and end the continuous supply of cattle, which resulted in The Battle of Olustee.[5] The Battle of Olustee was not only the biggest battle on Florida soil, but it resulted in one of the highest casualty losses percentage wise for the Union.[6] Though Florida was an important element in the Civil War, few know about this unique aspect of Florida's past.

In the winter of 1908, Mrs. Abernathy, the president of the Annie Coleman Chapter of the Daughters of the Confederacy, envisioned a monument with the goal of honoring the men who served in the Confederacy during the Civil War.[7] At the following meeting in December of 1908, the Annie Coleman chapter agreed upon the idea of creating a monument and started multiple fundraisers over the course of the year.[8] A year later in December of 1909, the women were faced with not only the expense of the monument, but also designing it.[9] The monument they designed included a six-foot marble confederate soldier standing atop a thirty-five foot monument.[10] The total cost of the marble monument was $2,500.[11] By calculating today's inflation rate, the cost of the monument would be approximately $60,000.[12]

There was a committee to discuss the two possible locations for the monument: overlooking Lake Eola or standing sentinel across the Orange County Courthouse (which is now the Orange County Regional History Center). On June 3, 1911 it was erected across from the Courthouse at the intersection of Main Street and Central Avenue.[13] The Confederate Soldier Monument resided at the intersection until 1917 when it was deemed a traffic hazard, thus relocating to the east side of Lake Eola.[14]

The 1911 Confederate Soldier Monument was created to honor the Confederate soldiers and ensure that through the years to come, the soldiers' deeds will never be forgotten. The monument is also a testament of how one voice can evoke not only discussion, but also the creation of a lasting tribute. For this monument is not only honoring the Confederate Soldiers, but also the perseverance of the women who recognized the historical impact of the creation of their monument. As the years progress it is important to have these lasting tributes lest we forget the sacrifices of those gone before.

On June 20, 2017, a century after being moved to Lake Eola Park, the nearly 9-ton statue was transferred to a section of Greenwood Cemetery in Orlando set aside for Confederate veterans. [15] A time capsule was discovered when the base was dismantled. Although defenders of the statue protested at a City Council meeting in May, there was no resistance to the monument’s removal.[16] Orlando Mayor John Hugh “Buddy” Dyer had announced plans to remove the statue a month prior, but the city never released a specific date.

[6] Coles and Ferry, "The Smallest Tadpole."

[11] Branham, "History of the Confederate Monument."

[13] Branham, "History of the Confederate Monument."