During the early part of The Great War, or World War I as Americans know it today, the United States kept a neutral stance. Unfortunately for Americans, unrestricted warfare at the hands of German U-Boats did not allow America to stay neutral for long. In 1915, the Lusitania, a passenger ship heading to Great Britain was sunk by German U-boats. Though Americans were killed, the U.S still stayed out. Many Americans believed “armed neutrality” was in the country’s best interest, but others heeded President Woodrow Wilson’s call to enter the war under the premise of “making the world safe for democracy.

On April 17, 1917, the United States declared war on Germany. Of the 4.7 million Americans who went to war, approximately 117,000 died and 200,000 were wounded. Orange County, Florida sent approximately 900 boys overseas, and thirty perished in the war. 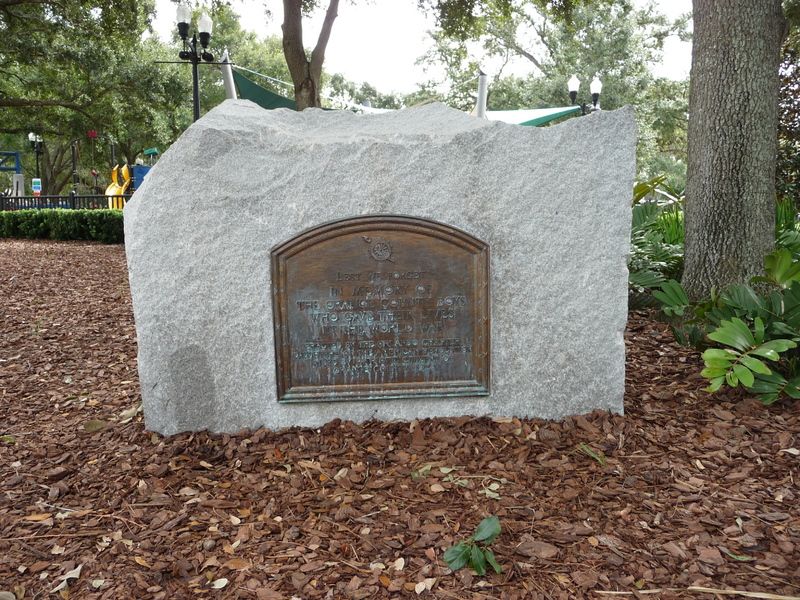 This marker was originally erected in front of Memorial High School on November 11, 1924. It was moved to Lake Eola in 1961 when Memorial High was demolished.

On November 11, 1924, Armistice Day, the Orlando Chapter of the Daughters of the American Revolution (DAR) dedicated a granite marker to the thirty soldiers from Orange County, Florida who died in World War I. It is the DAR’s mission to erect monuments to not only commemorate wars, but to commemorate the Americans who fought and died in those wars. The idea was conceived by the then-regent of DAR in 1920, but for unknown reasons, and much to the dismay of the DAR chapter, it took four years to construct.

The marker was originally erected at Memorial High School. Memorial High School was built in 1922 to commemorate the soldiers who lost their lives from Orange County. Therefore, it was only fitting for the DAR to place their commemorative marker at the school. The marker which reads, “Lest We Forget/ In Memory of the Orange county Boys Who Gave Their Lives in the World War,”consists of a bronze tablet attached to a large granite block.

In the dedication address, Miss Francis Gregory, chapter regent, proclaimed that the granite marker symbolized the solid character of the United States of America, and the bronze plaque commemorated those who made the marker possible: the DAR and the citizens of Orange County. After Memorial High School was demolished in 1961, the Orange County World War I Soldiers Memorial was moved to South Lake Eola where it still stands today.