The Soldiers' Monument stands in plain sight at the fore of Veterans' Memorial Park on the shore of Lake Monroe in Sanford, Florida. Despite its current place of honor, many people overlook this memorial in favor of the newer and larger monument that stands behind it, a few dozen yards closer to the lake. It has gone from a symbol of a community's mourning, and one of solidarity in the face of a highly segregated community, to a largely forgotten "broken" pillar, its history a hidden past that can easily be seen on the face of the stone itself. 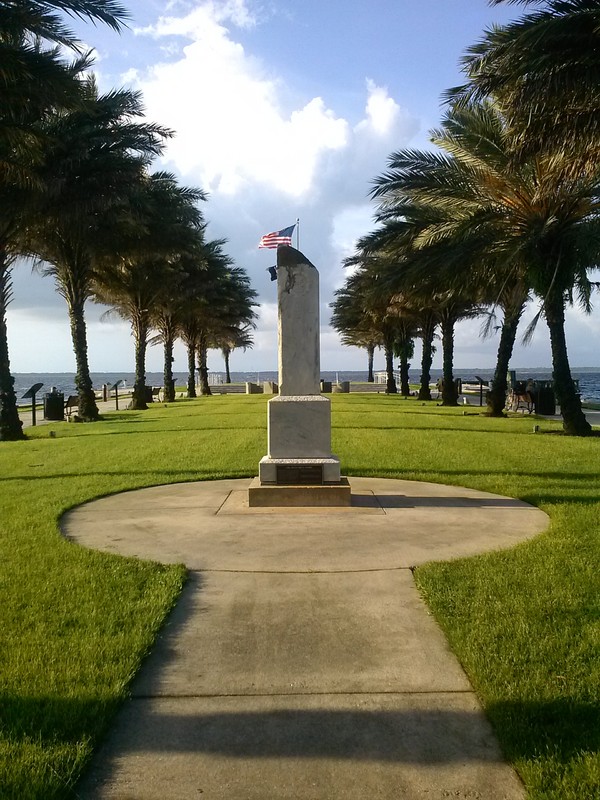 The Soldiers' Monument stands in plain sight at the fore of Veterans' Memorial Park on the shore of Lake Monroe in Sanford, Florida. Despite its current place of honor, many people overlook this memorial in favor of the newer and larger monument that stands behind it, a few dozen yards closer to the lake. It has gone from a symbol of a community's mourning, and one of solidarity in the face of a highly segregated community, to a largely forgotten "broken" pillar, its history a hidden past that can easily be seen on the face of the stone itself.

Of the approximately 116,000 U.S. casualties of World War I, seventeen were from Seminole County, Florida. Thirteen had died during the official years of the war; four died later due to complications related to war injuries. The Soldiers' Monument of 1919 was based on a simple idea: to commemorate the thirteen young men who had died to date.

The general citizenry of Sanford heard about the idea through an advertisement on the fourth page of the 20 December 1918 edition of the Sanford Herald. It read: 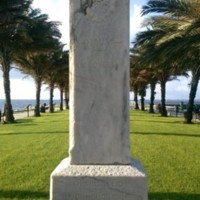 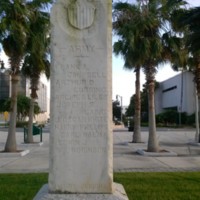 For a special reason which will be made known later a citizen of Sanford is anxious to obtain the name and branch of service of every soldier and sailor from Seminole county who has lost his life in service during the present war, whether in France or in camp in this country.

Relatives and friends of such boys will confer a favor by leaving the information at the Herald office.

For months there was nothing else. However, the employees of the Milvis Marble Works were busy carving a "broken shaft" pillar. Each side of the base features a different inscription.

As evidenced in the photographs, two names are near the base, while the other names are carved near the top or center of the marble. This was a necessity due to the heavy influence of white supremacist organizations, such as the Ku Klux Klan - Jenkins and Calhoun were African-American men. The inclusion of these men assured that the crowd of over 1500 people who gathered for the dedication ceremony consisted of people from all walks of life and of all the races present in Seminole County at the time. 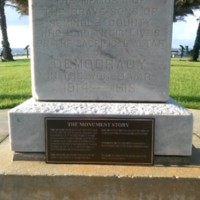 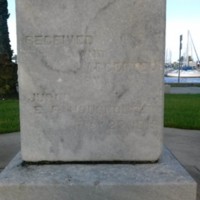 "Dedicated to the memory of the brave sons of Seminole County who laid their lives on the sacrifical [sic] altar of democracy in the world war 1914--1918 and plaque outlining the history of the monument."

Miller was the man behind the monument, as well as a number of other memorials and monuments in Sanford. As the local coroner and manager of the Milvis Marble Works, he had both the physical resources in the form of marble and money as well as the stoneworkers required to take on the project. Because he did "not desire any publicity concerning his part" in the creation of the pillar, as printed in the February 7, 1919 edition of the Herald, he kept the project a secret until the ceremony was announced. He also told the Herald writers that the broken shaft was "emblematical of the lives which were given to the cause of Right and Justice in the prime of their young manhood." 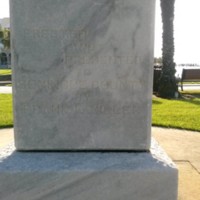 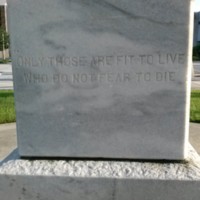 There were a number of prominent local citizens present at the dedication on February 23, 1919. Judge E. F. Housholder and Major Forrest Lake, who would eventually become mayor, played prominent roles. The Seminole County Guards took part in the ceremony. Perhaps most poignant was the unveiling itself, done by Frank L. Miller and Beth Lossing. She was the sister of the first victim from Seminole County, Arthur Lossing. They had lost their parents earlier, which left her an orphan while in high school.

This was only the first of many celebrations that centered around the Soldiers' Monument. Every Armistice Day a parade was held and a wreath placed on the monument in honor of the soldiers. There is a detailed account of the 1920 parade, which ended with Captain George Herring giving a speech, and the placement of the wreath by an honor guard. This custom continued until 1932, when it was noted that there was no Armistice Day observance. After thirteen years - one for each man lost in the duration of the war - the community had finished mourning.

The Soldiers' Monument had been placed in the perfect position to be the center of other celebrations, as well. For many years it stood next to the bandstand in what is now called Centennial Park. Previous names for the area include both Central Park and Fifth Street Park, as it is bounded by Fourth Street, Fifth Street, Park Avenue, and Oak Avenue. For years this was the premiere area to have outdoor celebrations. There are a number of existing photographs of gatherings around the bandshell, though the monument is hard to spot in many of them.

When the park was renovated in the early 1980s, the monument was moved to the "Legion Hut”, a log cabin on the waterfront. The hut served as the American Legion post until the organization moved to a new building near Highway 17/92. When the Legion moved, the monument moved with it. The pillar stood in the parking lot just to the side of the front door of the Legion Post until 2006, when the Veterans' Memorial Park on the shore of Lake Monroe was established.

"Monument in CityPark to be Unveiled." The Sanford Herald, February 7, 1919.