Simón José Antonio de la Santísma Trinidad Bolívar y Palacios, more commonly known as Simón Bolívar, was born into a wealthy family and was well educated. Bolívar became a member of a resistance group that was against the ruling of Spain’s King Joseph Bonaparte. On May 14, 1813, Bolívar started the “ Compana Admirable” campaign to free Venezuela from Spain’s control. The campaign was a triumph and the Venezuela Second Republic was born. Bolívar was given the name “El Libertador” or the Liberator after this successful break from Spain. In 1821 the creation of the Gran Colombia was formed which included the present-day countries of Venezuela, Colombia, Panama, and Ecuador. Bolívar later became Dictator of Peru and also the founder of Bolivia.

Bolívar tried to model the new countries after the United States having many people view him as the South American George Washington. Bolívar then declared himself Dictator of Gran Colombia in 1828 in hopes that this would possible be a way to shape the newly formed country into something more prosperous.[1] Bolívar resigned his position a couples years later and decided to sail to Europe. Bolívar didn’t make it though and on December 7, 1830 he passed away in Santa Marta, Columbia after battling tuberculosis.[2] 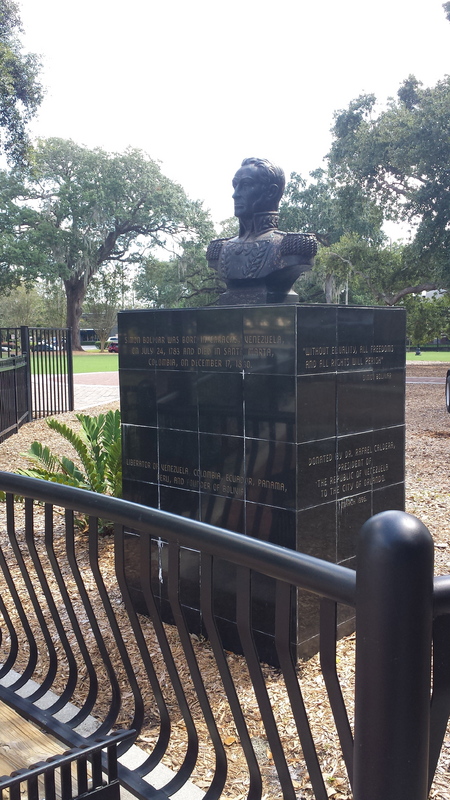 "Without Equality, All Freedoms and All Rights Will Perish"

In Venezuela, many towns, villages, and cities have a Plaza Bolívar where festivals, parties, and even protest are held.[3] The bust of Bolívar at Lake Eola has started to also draw in this similar custom. Located on the side of the International Plaza and Bridge, the  Bolívar bust is accompanied by other very influential people in history.  The bronze bust of Bolívar adorns the top of a tall black glossy pedestal. Altogether it weights about 150 pounds. A local Venezuelan group, who donate it to the City of Orlando, put in the monument in March 1996.[4] During opening week before the revilement of the bust, Lake Eola held concerts and lectures about the famous leader. In attendance for this unveiling was Mayor Glenda Hood and Venezuelan dignitaries.[5]

With Florida having such a large Hispanic culture, especially Venezuelans, it would only seem fit to have a monument celebrating this hero. Next time you are walking around Lake Eola, I recommend you visit this monument. The monument not only commemorates Bolívar as a military hero but also the struggle and hardships that the people of South American had to endure during the reign from the Spain.