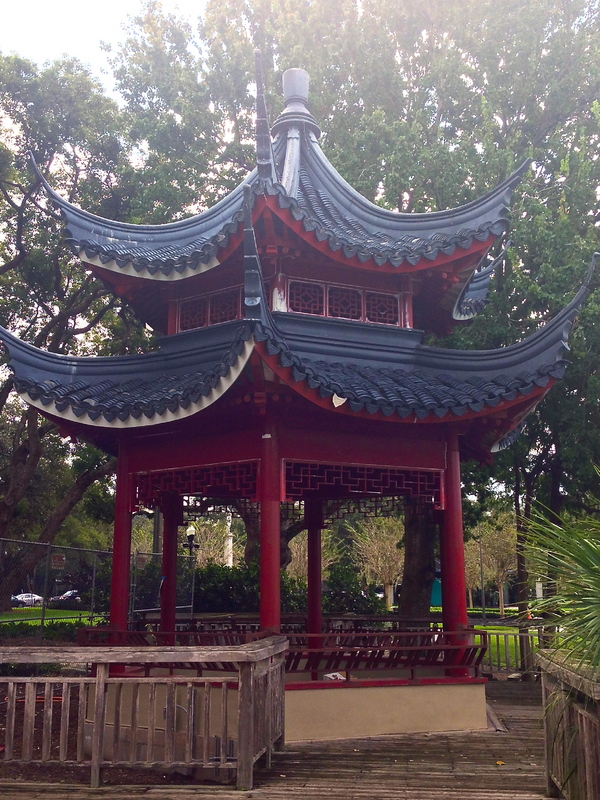 The Chinese Pavilion is called a ting due to its single story. It was erected in 1988 as a symbol of international friendship while simultaneously beautifying the park in which it is housed.

When calling to mind a monument, most recall a statue or stone figure, with plaques adorning the structure to explain its historical significance. Although the Chinese Pavilion at Lake Eola may not be a typical monument, it indeed celebrates the events and situations that mark Orlando’s identity at the time of its placement twenty-five years ago. The structure, called a ting, is not only a symbol of international friendship, but also acted as a vehicle for change within the park and city itself, lending its beauty to a city-wide initiative to reinvent the image and purpose of the heart of downtown Orlando.

Dr. Nelson Ying gifted the structure in 1987. Ying, a Chinese-American scientist, businessman, benefactor, and philanthropist stated that he chose to dedicate the pavilion for two reasons: “to create a place ‘for this mayor and future mayors to entertain dignitaries,’” and “‘to make downtown more attractive to citizens.’”[1]  Two years prior in 1985, Ying worked closely with mayor Bill Frederick to secure a sister-city relationship with the city of Guilin by accompanying Frederick on a three week goodwill trip to China.[2] Negotiations with Guilin during this trip, much aided by Ying, resulted in successful sister-city establishment.[3] 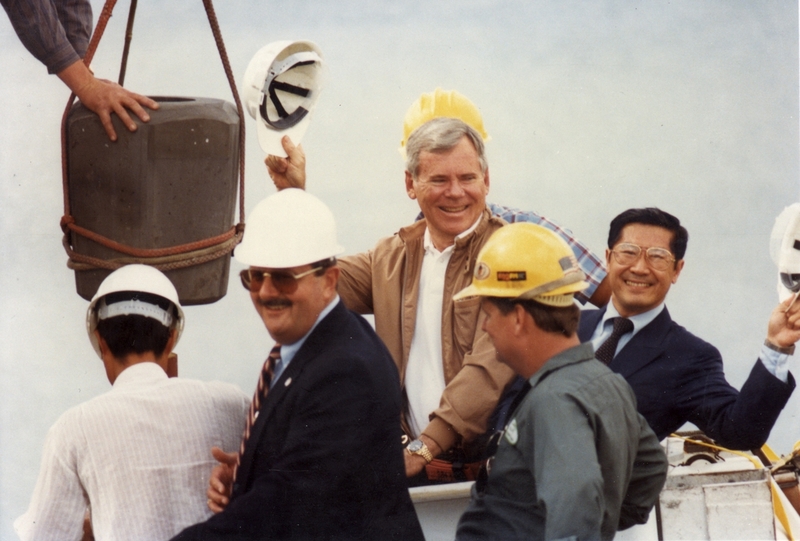 Guilin, who shares its slogan with Orlando (The City Beautiful), is a major tourist destination, second in China only to the Great Wall.[4] Guilin’s downtown landscape consists of four lakes, and downtown is easily recognizable by several pagodas that adorn these lakes.[5] Surely, Ying intended to honor the young sister-city relationship with Guilin by specifically placing his donation on the edge of Lake Eola. This location offered the most significance in an effort to mirror and highlight Orlando’s international friendship with Guilin.[6]

The precise location of this structure, i.e. along Lake Eola, offered a second advantage.  It aided in a city initiative to beautify the downtown park. In 1988, Orlando engaged in “a multimillion-dollar plan to change the image of the park as a hangout for drifters and prostitutes”.[7] The city spent $3.3 million in renovations, adding new and extensive landscaping, a renovation of the fountain in the lake, pollution control devices, wider sidewalks, new lighting, new restrooms, fences, the Japanese rock garden and in late 1989 finished the park’s amphitheater. Among these additions was the Chinese ting, playing a role in the “program to attract more families and downtown workers to the park”.[8]

The Red Chinese Ting is a monument commemorating and celebrating the events of Orlando in the 1980’s. In addition, its location on the edge of Lake Eola ensures its relevance; it is a symbol of international friendship in its mirroring of sister-city Guilin as well as a medium for positive change in the downtown park. Certainly, such an intelligent and notable man as Dr. Nelson Ying realized that a specific gift in a specific location could create dual benefits. The location gives the monument purpose. Removed from its location and context, the existence of the ting seems strange, as evidenced in criticisms of the structure itself. However, its placement in the heart of downtown Orlando continues its purpose as a beatifying element and will forever be a symbol of Chinese friendship.

[3] Bacchus, "China 'You Are Watching Flowers From A Galloping Horse,' Said The Guide To The Visitors From The Other Side Of The World.  But What Flowers They Were."