The City of Winter Springs is like many of the other suburbs that make up Central Florida. It has a local town center, grocery store, and high school. These are normal things to notice while living or driving through a Central Florida city. What remains unseen by visitors and residence is the historical relevance residing within these towns all over Central Florida. The Veterans Memorial located in the Winter Springs town center is a perfect example of a historical site gone overlooked. What make this historical site, along with all others around Central Florida unique and significant, are the social sentiment, local population, and motivation behind the erection of the memorial. 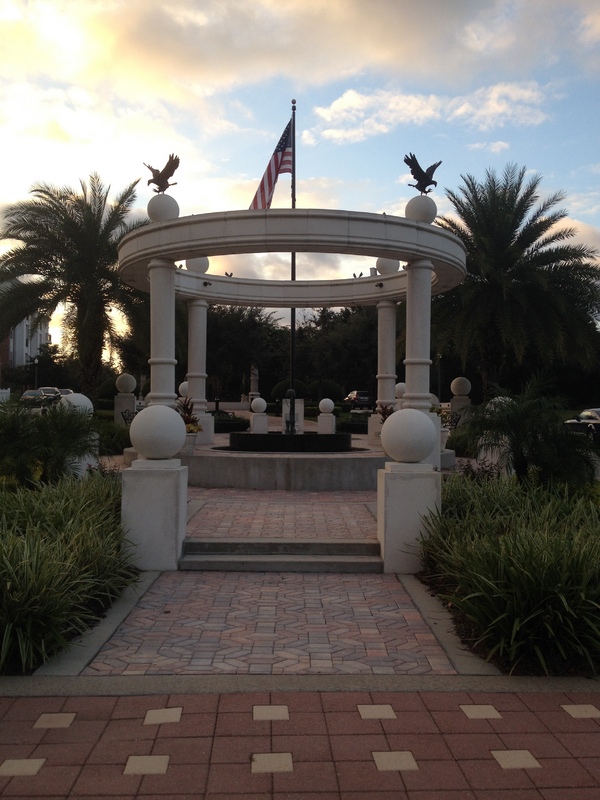 The Winter Springs Veterans Memorial located at the corner of Tuskawilla Rd and Blumberg Blvd. It was erected to commemorate the local soldiers, and the service they provided for their country.

The Veterans Memorial project was started in 2005, and is located behind the recently built Winter Springs town center. The memorial was kick started by the local rotary club who wanted to express a feeling of gratitude towards all the men and women who had served in the military[1]. To ensure quality and proper fund raising, the rotary club partnered with the city of Winter Springs in the building process. Both groups were able to come together, and split the cost of the monument in half. [2] In combining the efforts of the rotary club and the city, both groups were able to establish a location for the memorial and a proper funding plan to get it built.

The social sentiment of Winter Springs in relation to Veterans Memorial at this time is extremely important to understand. When looking at the time period of which the memorial was started, it is easy to get a strong grasp of the social sentiment. Having the process begin only four years after the tragedy of 9/11, and during the War of Iraq presents a time period of national pride. The soldiers that had fought for the freedom of the United States in all theaters of the world, are being remembered throughout the social classes. This is a significant social change from the disapproval sentiment of the Vietnam War. The large support seen for the Iraq War compared to that of Vietnam shows a strong shift if social sentiment towards the military, and coincides with the ideas of historical significance for the memorials local population.

The population of Winter Springs is intertwined with social sentiment of the city. The fact that the city along with the community wanted to build a memorial to remember the local soldiers and the sacrificial they made, speaks volumes to the populations relation to military personnel.  “After reading a commemorative plaque at the memorial’s entrance, guests walk into a rotunda lined with metal plates engraved with the names of veterans, alive and deceased, who call Winter Springs home.”[3] This description of the memorial furthers the idea of the population’s interaction with the soldiers. This historic site focuses on the recent and past events, to which the community as a whole can commemorate together.

The combination of Winter Spring’s social sentiment and local population relating to the Veterans Memorial paints a clear picture to main motives behind the construction. The community wanted to have a memorial that would honor all of the local soldiers, and the service they provided for the United States. The significance lies in the vast historical time period of when locals had served in the military. It creates a representation of local history while commemorating the national history of the military as well.

The next time you find yourself in Winter Springs, I encourage you to stay on the beaten path, but keep your eyes open for history hidden in plain sight.