The Mayfair Hotel and Mayfair Inn

As a result of the political scandal surrounding Forrest Lake, the hotel named after its founder was vacated in 1928. During the early-1930s, the hotel changed hands twice. The City of Sanford was the first to purchase the building in 1930 after it had been abandoned for two years. William E. Kirchhoff, Jr. leased the hotel in December 1934. Under the terms of the lease, the hotel was required to open by February 15, 1935. The lease allowed Kirchhoff to purchase the property outright in 1937, which he did for approximately $15,000. Although the original deal was for $35,000, the city lost ownership because of outstanding unpaid tax certificates.

When Kirchhoff purchased the hotel, the interior had already been stripped of furniture and other fixtures, which were all purchased from John Wannamaker's of New York. Kirchhoff travelled throughout the country and purchased furniture from auctions in Atlantic City and other out of business hotels to furnish his hotel. He also changed the name of the hotel from Hotel Forrest Lake to the Mayfair Hotel. Under Kirchhoff's ownership, the Mayfair Hotel became known as one of the finest hotels in the South.

During World War II, the United States Navy took over the building to house pilots training at the Sanford Naval Air Station. Kirchhoff got it back in late 1944. When Camp Blanding wound down, he purchased steel rebar and used it and his agricultural crews to build a swimming pool, two tennis courts, and a shuffleboard court.

In 1947, Kirchhoff sold the hotel to Horace Stoneham, owner of the New York Giants baseball club. Stoneham had an interest in the hotel because the Giants played their spring training games in Sanford. He wanted the hotel not only to house the baseball players, but to also attract more tourists to the city during spring training season. Like the previous owner, Stoneham renamed the hotel, calling it the Mayfair Inn.  The hotel was also renovated in the 1950s. Both the interior and exterior were repainted, a new roof was installed, new plumbing, and a new kitchen was installed. Celebrities frequently visited the Mayfair Inn. However, according to Kirchoff's son, former County Commissioner Bill Kirchhoff, contrary to what many news articles have said, there is no record of Al Capone ever setting foot on the property. 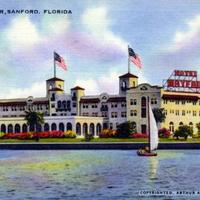 Postcard of the Mayfair Hotel. 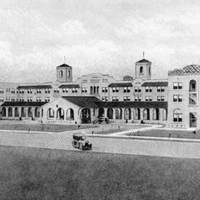 Drawing of the Mayfair Hotel. 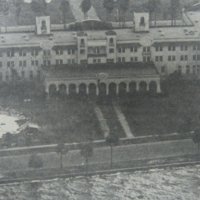 Bird's-eye view of the swimming pool construction at the Mayfair Inn in 1951. 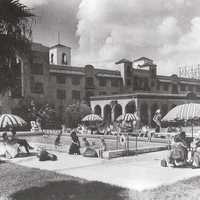 Tourists at the Mayfair Inn swimming pool in the 1950s. 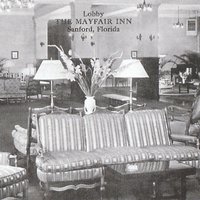 Lobby at the Mayfair Inn. 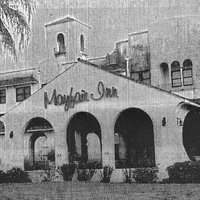