The former Harley Hotel building, located at 151 East Washington Street in Downtown Orlando, Florida, in 2003. Lake Eola and the Linton E. Allen Memorial Fountain can be seen in the distance.

The site was originally occupied by Memorial High School, the second high school constructed in Orlando. In 1961, the school building was sold to hotel owners from Jacksonville. In 1963, the school building was razed and replaced by the Robert Meyer Hotel, which contained 250 rooms. The hotel became the Kahler Plaza Inn in 1972 and then the Harley Hotel in the late 1970s, when it was purchased by Harry Helmlsey. In the 1990s, the hotel was purchased and renamed Four Points by Sheraton Orlando, which closed in 2003. In 2004, developer David Eichenblatt began converting the hotel into the Metropolitan at Lake Eola condominiums, which contains 128 units as of 2013. 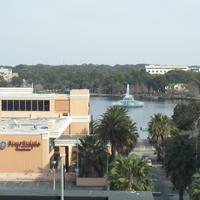