The fourth issue of The Watermark was published on October 12, 1994, and shifted toward a heavier political focus dealing with national LGBTQ+ (Lesbian, Gay, Bisexual, Trans, Queer/Questioning, and others) issues. The front page is primarily dedicated to the discussion on the participations of "Gays in the Local Media." The other portion of the front page discusses how local politicians participate in the Metropolitan Business Association (MBA) Forum, notably addressing the political careers of Buddy Dyer (b. 1958) and Fran Pignone. The discussion of the articles and articles on the next page discuss the need to maintain anti-discrimination laws. The issue also addresses the HIV-AIDS Institute disconnecting from the University of Central (UCF_, and the remaining offices of HIV-AIDS Education and the "Info-Maniacs," a peer education program. The issue then continued the trend of publishing international issues such as, Maryland’s decision on Parental Rights for gay parents, San Francisco’s fight for non-discrimination for private businesses, and South Africa’s condemnation of Gay Pride. This fourth issue also saw the return of discussion about parties and circuit life, this time covered in an article about Madis Gras in Australia.

FLORIDA'S DISTINCTIVE GAY AND LESBIAN PUBLICATION.
VOLUME 1, NUMBER 4
OCTOBER 12,1994
GAYS IN THE LOCAL MEDIA
FAIR SHAKE OR SHAKEDOWN?
by Rafael Harris Gasti
John Rose and Rev. George Crossley on Channel 24’s Opinion Street.
Whether you’re gay or straight, a well-traveled sophisticate or a couch potato, images of homosexuality are everywhere. From PBS’ pixilated Tales of the City, to Channel 2’s investigative report on homosexual encounters in public parks, to The Orlando Sentinel's “Woman Seeks Woman/ Man Seeks Man” TelePersonals, these images are beamed into living rooms and bedrooms and delivered to front doors. For many, these images alone define gay and lesbian experience.
The influence of the media, particularly television, on popular culture can hardly be overemphasized. This is particularly true when media images are not balanced by real life experience. In Central Florida, these media images of homosexual experience have enormous power, because gay culture and political influence are emergent, and a conservative climate still dissuades many from coming out to family and friends.
And make no mistake.. .in the media business, where patronage reflects profits and where viewers and readers mean dollars, images of homosexuality are enormously popular. At once sexual and political, titillating and avant garde, news stories and dramatizations addressing elements of gay experience are commonplace; a sweeps week staple. But are these images balanced? Do they truly reflect gay and lesbian experience?
Three local gay activists, John Rose, Saviz Shafaie, and Brian Arbogast de Hubert-Miller, have made it their mission to research and then address these issues, in letters and phone calls,
and in the board rooms of local media outlets. Their combined experience is both interesting and instructive.
Gay advocate John Rose, a native of Orlando, speaks adamantly about the issue of censorship and the need for a diverse, gay-affirming media in Central Florida. Years of activism have mellowed Rose somewhat, but a glimpse of his renowned verbal fireworks is always near the surface. Despite shortcomings, he notes with pleasure that “there has been soTrie substantial improvement concerning gays in the local media.”
Brian Arbogast de Hubert-Miller, a Community Advisory Board member at WMFE-Channel 24, was more guarded in his assessment of the local media. He maintains pointedly that “money talks,” and that money and politics in conservative Central Florida can be used against the unpopular or unempowered to trivialize and render them invisible.
Meanwhile, with the demeanor of a thoughtful pacifist, fellow Channel 24 Community Advisory Board member Saviz Shafaie notes that local media have moved away from a focus solely on the exotic and bizarre, like sex crimes and extremes in self-expression. He lauds the appearance of “some gay-sensitive material rather than none,” and he is cautiously optimistic about the future.
Supporting Shafaie’s optimism, Rose pride-fully notes the recent progress made at PBS affilliate Channel 24. (Note, Channel 24 was
Continued Page 8
CANDIDATES MEET FOR MBA FORUM
< Echoing Mmionofgay$
and lesbians, candidates for local elected office joined in a Candidates Forum sponsored by the Metropolitan Business Association, Thursday October 6 at the
Moderator Tom Dyer opened the forum, which featured a five minute presentation by each candidate followed by a brief question and answer period,: by explaining his criteria for choosing a candidate and issued that as a challen^ to each of the present-
ers, ^
“Before 1 consider voting for any person for any office, I ask myself it this is someone who will work to eradicate discrimination against gays and lesbians. And if it is not, 1 will not vote for them,H Dyer said,
, The first to meet Dyer’s challenge was Orange County Chairman candidate Fran Pignone, who has been an outspoken advocate of the gay and lesbian community, attending June’s Pride Parade as well as the Spectrum Awards. . , Continued Page 8
COUNTY COMMISSIONER MABIJ80TISR: “not favor of
INSIDE:
The Rhythm Method: Lesbian A Cappella With Attitude
Plus...News, Reviews, and LOLA.
LAND TITLE INSURANCE
of Citrus County, Inc. • Winter Springs Office
to announce the opergjjg o| our beautiful new Winter Springs office.
We are proud to offer:
□ The most competitive rates in the area
□ Closings in your office or ours
□ 24 to 48 hour turnaround on most searches
MB -■ l^|^t^;;aiWcrvveekendct#^ftl your convenience
We are excited about our new central Florida location f and look forward to wod#ig with
207 Moss Road North ♦ Suite
(407) 327-9990

Salmon with a Habanero (pepper) lime butter, and a yellow tomato salsa. This artistic plate was complemented by thin slices of boiled potato and shredded lemon peel I had the Hickory smoked Jamaican Jerk pork loin with Poblano barbecue sauce. My dish was completed with a wonderful carrot-corn bread and potato black bean cake. Donna delved into the walnut cheesecake torte and lost herself totally. Tempted by her moaning, I tried a bite. Never have I tasted a dessert so delicious. It made my conservative apple cobbler seem disappointing, which it wasn’t.
Moorefield’s is a taste of heaven lost in a community with uneducated palates. Moorefield’s is not just about fabulous food but about two women struggling to survive. During the course of the evening, Kara pulled a chair over like an old friend and filled us in. While Margaret Moorefield is humble about her talent, wearing a traditional chef’s outfit and checking the dining area periodically, Kara is the energy of the establishment. That energy has an undertone of anger. We learned they felt abandoned by the gay and lesbian community. Unfortunately, they didn’t advertise with the community when they first opened, and now their funds are limited. They want their business to thrive in Orlando and within the gay community. And so do we. Rosey’s Rating: ★★★★★/GGG.
Civic Theatre’s SecondStage steals the spotlight again. Nightclub Cantata is this Fall’s finest theatrical offering so far. It’s passionate, bizarre, intense, personal, genuine .. .in short, nothing less than poetic.
Elizabeth Swados (who conceived and composed the show) creates a space between two intense poems (written by Nazim Hikmet), then fills it with horror, awe, and struggle. Hikmet’s poetry acts like prison walls, isolating, oppressing, and holding a small band of performers captive.
Between these walls, they fight for survival, understanding, equality, and acceptance. They also fight for love. Ultimately, they fight to live life to its fullest.
Expressing themselves through poems set to music, improvised sounds and words, dance and movement, the performers work as a seamless ensemble. Each one deserves to be mentioned by name:
Angela Sparks works with real attitude and honesty; Anthony Joseph Killeen taps internal anger and personal struggle. Together, they create one of the show’s most intense moments, “Dibarti,” a poem that echoes conflict, hatred, and disappointment.
Rosemary Marston is earthy, and her deep desire brings “The Dance” to light, making it a sad and exhilarating cry for life.
Ernest White drives “Adolescents” into the heart with his simple, honest reflections of growing up. Nothing over-the-top here; just hard, isolated truths.
Will Braun’s impish playfulness is suddenly the knife that stabs the audience at the end of “In Dreams Begin Responsibilities,” a scene staged brilliantly by director Robin Jensen.
John Bosman, Darla Walker, Angela and Anthony make “Ventriloquist and Dummy” a bizarre expression of relationship, and the fight for equality that threatens most couples.
Wilton “De Vonn” Baker creates an echoing and moving ode “To The Harbormaster.” Nightclub Cantata works like “performance art.” It is deep and profound, and each person on stage clearly contributes by using their own experiences as an instrument of expression. Their voices join to make one loud cry...the fullness of life that they entreat. Truly, a talented cast.
Jensen’s direction of Cantata is uncom-
plicated and direct, letting the words and songs do the work. The lighting and set are minimal but dramatic. The whole space of SecondStage is used effectively.
Through poetry and songs we move from captivity to freedom, until our one desire is to dance in the sand and move with the cast into a space of rejoicing and light.
Bravi! Bravi! - to an ensemble that is natural, honest, interesting, and endearing.
Nightclub Cantata runs through Oct. 16. Tickets $12. Call (407) 896-7365for reservations.
MACRO'S 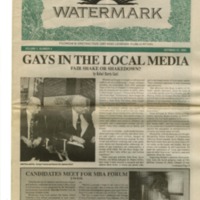