The eighteenth issue of the ninth volume of The Watermark was published on August 29, 2002, and was the newspaper's annual arts coverage edition. The cover story features two lesbian filmmakers, who would debut their collaboration film, Butch Spa Day, at the annual Tampa International Gay and Lesbian Film Festival. Also featured were spotlights on local Central Florida artists, whose disciplines include painting, dance and theatre. The issue also includes several stories relevant to the LGBTQ+ (Lesbian, Gay, Bisexual, Trans, Queer/Questioning, and others) community, such as a Pennsylvania court ruling in favor of adoption in same-sex partnerships, the murders of trans individuals in Jacksonville, Florida, and Washington, D.C., and statistics on the increase of non-discriminatory practices in organizations. 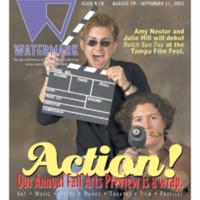