The cemetery, just west of Orlando, is the site of the remains of various early settlers of the city, including Aaron and Mary Jernigan. Originally called Patrick Cemetery, the graveyard was originally located between Lake Lorna Doone and Rock Lake, and held the remains of members of the Beasley, Ivey, Patrick, and Roberson families. The four families formed the Lake Hill Cemetery Association in 1884 and moved the previously buried remains to the new Lake Hill Cemetery in Orlo Vista. 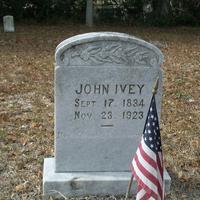