Postcard posted February of 1919 that shows Central Avenue (now Central Boulevard) at the corner of Court Avenue. Pictured is the Elks Club, as well as the intersection of Central and Orange Avenue. The Orlando Lodge of the Elks was founded on June 28, 1907. The Lodge rented space, first from the Odd Fellows and later the YMCA, prior to purchasing the land at Court Street and Central Boulevard for $1,250. The building was constructed circa 1910 by the Benevolent and Protective Order of Elks and cost $8,500 to build. It was made in the Modern Eclectic style with Bungalow elements. Orange County eventually bought the property and demolished the building in 1955, at the same time the 1892 Orange County Courthouse was being torn down in preparation of the building of the Courthouse Annex building. The ground where the Elks Building once stood was turned into a parking lot for the Courthouse. The Elks Club moved to 409 East Central Boulevard and remained there until a fire destroyed their lodge in 1969. Afterward, the Elks moved to 12 North Primrose Avenue. The parking lot was eventually redeveloped into Heritage Square after the demolition of the Orange County Courthouse Annex in the late 1990s. Heritage Square opened in 2000.

Copyright to this resource is held by E. C. Kropp Company and is provided here by RICHES of Central Florida for educational purposes only. 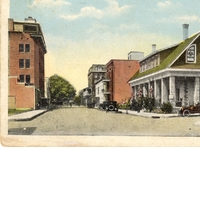