The Maitland News was a local newspaper originally published by the Maitland Realty Company (and later by The Maitland News Company) which began circulation in April 1926. This edition features articles on topics such as the rising demand for housing in Maitland, a school graduation, library renovations, water wells, new sidewalks, an obituary for local resident Ruth Fleming, a press banquet, a wedding anniversary, and a local events calendar. Also featured are several advertisements for local businesses, including one by the Maitland Realty Company announcing the need for a local drug store, a garage building, a cement block plant, novelty works, a filling station, and a warehouse, and anyone who can finance or furnish any of these. This edition is missing pages 2 and 3.

THE MAITLAND NEws
Published Weekly by THE Maitland News Co, Martland, ORANGE County, Florida
Volume I
MAY 22, 1926
-
Number 3
Homes Now. In Great Demand In Maitland
GRADUATING EXERCISES
The Maitland School closed its ses sion for the year with general exercises on the evening of May 6 and a Health Program on the morning of May . The exercises consisted of an operetta entitled The Rose Dream,presented by the children of the school under the direction of Miss Lena Fugate and Mrs. Allen, musical numbers by the Misses Minnie More men and Margaret Russell and the presentation of diplomas by Superintendent A. B. Johnson. The gradu. ating class included Mildred Jones, May Osteen, Gordon and Thomas Patterson, Teddy Brocksmith, Lloyd Haines and Kenneth Jackson
At the health program the pupils of the Fifth and Sixth classes gave a one-act play, The House the Children Built," after which the children who had kept their health chores were presented with booklets, badges and pins and the Accolade was administered to the pupils of the Seventh and Eighth grades.
The school has now finished three years in the present school building and before another year commenses the auditorium will have to be divided to give room for a fourth classroom. The school will then have four rooms, with two grades to a room and will be in a position to give the best at tention to every child, as the teachers will not be overworked and the rooms over crowded as they have been the past year.
Under the direction and with the assistance of the Parent Teachers As sociation, the playground has been put into good order, with a clayed ball ground and apparatus
The trustees, Mrs. J. H. Bennett, J. W. Rice and J. W. McNair, have improved the Library by purchasing a splendid set of reference books and are planning many improvements for the coming year, not the least of which will be the installation of city water.
MAITLAND LIBRARY CLOSED FOR REPAIRS
The Maitland Library is closed and will be for several weeks while repairs are made and a general over hauling and cleaning is done. Mr. L. W. Dommerich is having the walls retinted at his expense and the Library Association is at the same time having the outside walls painted, and general repairs made. The moss has been removed from the trees and the grounds are being put into good order. When the work has been finished the Association plans to open the Library to the public with an in formal reception, the date of which will be announced later.
Mr. L. W. Dommerich has also made the Library a generous gift of books consisting of ters of walter H. Page in three volumes, The Intimate Letters of Colonel House in two volumes, Robert E. Lee, Soldier, two books of fiction and subscriptions to the National Geographic and St. Nicholas.
Another very substantial gift has recently been received in the form of over seventy-five volumes of fiction and scientific books, presented by Dr. H. B. Boyce of Rollins College from his private library.
Lists of new books as they are received at the Library will be published weekly in the Maitland News so that readers may be informed as to what are at their disposal at the Library.
MRs. RUTH FLEMING
Mrs. Ruth Fleming, daughter of Mr. and Mrs. J. H. Bennett died suddenly May 14 on board ship coming in to Savannah on her way down to visit her parents. Mrs. Bennett went to Savannah and brought back her daughters remains to Maitland where burial took place last Monday. Mrs. Fleming is survived by her husband James E. Fleming and little daughter Norma.
Houses Formerly Closed to Be Occupied This summer
It is imperative that building con struction be materially speeded up in Maitland to care for the housing of new families coming in. As a temporary expedient most of the homes of the winter residents which are usually closed during the summer months will be occupied this year by new residents who have not yet been able to secure permanent homes. Mr. Clifford Black and family of the firm of Black and Black are oc. cupying the residence of Senator and Mrs. Long who have just motored up to their home in Coatesville, Pa. A letter just received from Senator Long reports that they had a pleasant trip driving through in five days. Mr. and Mrs. F. T. Marsh, who have occupied the home of H. C. Boss since his return to Milford, N. J., in March, are now living in the house on the Blackwood place, recently purchased by Senator Long Underoaks, the Kingsley estate on Lake Maitland, has been occupied since the return of the family to Elizabeth, N. ., by E. A. Upmeyer and family. Mrs. Upmeyers mother, Mrs. Archer, is living in their cottage until her new home on Horatio Ave. is finished. Mr. and Mrs. Haldeman have taken the Pearson cottage for the summer and Mr. and Mrs. Horner are oc. cupying the Wilcox home.
water MAINS BEING LAID
Work is progressing on the laying of mains for the water system. As soon as this work is completed the pump will be installed and the water connected.
sidewalks BEING LAID
work on laying sidewalks in Greenwood Gardens has been come menced with a sidewalk along West Sybelia Ave from the Highway to the school. Sidewalks are also being in Orangedale Park at the south end of town.


PRESS BANQUET ATTENDED BY MAITLAND PEOPLE
At the banquet given by the Orange County Chamber of Commerce in honor of the County Commissioners and the Press, Maitland had the largest representation of any town, with a delegation of sixteen. Messers and Madams E. A. Upmeyer, S. J. Stiggins, J. H. Bennett, J. H. Hill, F. T. Marsh, C. N. Beecher, R. A. Wheeler and L. L. Coudert J. H. Hill in a few well-chosen words gave the toast to the County Commissioners, which was responded to by the Hon. L. L. Payne and Capt. B. M. Robinson.
WEDDING ANNIVERSARY IS CELEBRATED
The fifty-sixth wedding anniversary of Mr. and Mrs. W. H. Johnston was celebrated on May fourth by a sup: per party at the Maitland Library. The occasion was rendered doubly memorable by the presence of Mr. and Mrs. Johnstons daughter and her husband, Mr. and Mrs. H. S. Thomp. son, whose anniversary is on the same day. After supper the party were entertained with the recitation of Scotch poems and stories by Mr. John McCullogh, songs by Mr. Irving Bacheller, the exhibition of her work in white point portraiture by Miss Edwards and moving pictures taken by Mrs. Selden White of Evanston.
LOCAL ITEMS Miss Georgianna Hill and Miss Eleanor Upmeyer entertained on Saturday at a bridge luncheon at Under Oaks. Mrs. Rosa L. Dickinson has been the guest of Mrs. Vanderpool during the past week. Mrs. Geo. W. Hoyt, who has been visiting her daughter, Mrs. S. B. Hill, . returned last Wednesday to Charleston, S. C. Miss Nannie McCorkle spent last week in Maitland as the guest of Miss Stella M. Waterhouse. Mr. and Mrs. K. N. McPherson are now completely settled in their new home on Lake Catherine.
TEN COMMANDMENTS FOR the HOME TOWN I. Thou shalt love thy home town above all other towns. Thou shalt be loyal to her people and to her institutions.
THE MAITLAND NEWS
Α77 η / //
1. DRUG STORE with twenty-five feet H on highway. Man will lease and start business as soon as building is ready. 2. GARAGE BUILDING about 50x100. H Responsible party will take lease at H Once. . SITE FOR GARAGE on corner new H state highway in Maitland. 4. Party will lease site for CEMENT H BLOCK PLANT. H 5. Party will lease site for NOVELTY WORKS. | . Site wanted for FILLING STATION.
7. Party wants WAREHOUSE SITE
on highway and railroad.
- IF YOU CAN FINANCE H OR FURNISH ANY OF THESE SEE US AT ONCE H Dea/ mi/ a Reafor
A IT L A N ID
REALTY COMPANY 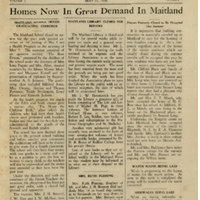