The inaugural issue of The Watermark was published on August 31, 1994, and focused on several hot topics that were abuzz in the LGBTQ+ (Lesbian, Gay, Bisexual, Trans, Queer/Questioning, and others) community. Hit topics included the cover story interviewing Married… With Children co-star Amanda Bearse (b. 1958) who was promoting her new special Out There II, an all LGBTQ+ comedy special. Similar topics of LGBTQ+ public exposure are scattered throughout the issue, including Fran Pigone, a pro-LGBTQ candidate for Orange County Commission Chairman, "Florida’s Freshest Fruit," an all LGBTQ improv troupe, and Brian Fagan, a gay man and one of Orlando’s premier runners. This first issue also included national LGBTQ+ news stories such as California’s Spousal Rights Bill, Yale’s same-sex partner health care plans, and Maine’s anti-gay initiatives. Another major component of the issue was discussion about Orlando’s LGBTQ+ nightlife locations and opportunities. In this issue, it was discussed that Tracks, a prominent bar had closed, and that Boxcars had opened in its place. Boxcars subsequently published a full page ad on the final page of the issue.

The Va"£AY”tioners Club
A Full Service Travel Agency offering the finest in travel programs to the gay & lesbian traveler.
407 SSI 5635
i
Aruba - Costa Rica - San Juan - Mexico - New Orleans - Key West - Orlando | RJ3.V.P. Cruises - Cay Rodeos - Cay Mardi Cras - Mr Leather and so much more
Sydney's Cay Mardi Cras '95
Round-trip air from Olando, transfers, 7 nights hotel accommodations 5 day Sydney transit pass, Cocktail party, Harbor Cruise, parade viewing and the Mardi Cras Ball.
all for only, $1,997. pp/do*
<-----------------»
Spring Break Orlando
April 1 - 7,199S
Thats right Spring Break right here in Orlando.
For more information call,
Mark at 240 3600.
WATERMARK / August 31, 1994 16
IN REVIEW
Continued Page 16
Jon Plowman, proudly spouts. “It’s been one of the reasons that America’s been reluctant.” But if you ask me, that’s the very reason Edina and Patsy are so attractive to this sterile, politically correct generation.
Before you clamor to your tele, America, there are a few things you need to know to assimilate yourselves to AbFab, as it is affectionately known. Here are some tips to help you.
1) Edina (Jennifer Saunders) and Patsy (Joanna Lumley) are fortysomething fashion gals. Their major addictions: smokes, alcohol, and drugs (every kind you can find), their obsessive issues: slaves to fashion, wealth, and other current trends, from psychic friends to Buddhist chant, from fad diets to isolation tanks (which Edina can only use if Patsy’s with her).
Edina’s hard up and heavy. Patsy’s coked up and homy (a confirmed nymphomaniac). Basically, they’re everyday people.
2) “Fags” are cigarettes, so don’t get offended.
3) Saffron is Edina’s daughter. She’s a smart, young, science student; the only stable thing in the house, but watch her tongue.. .it’s sharp.
4) Don’t be surprised if you recognize some odd characters. Since the show’s instant fame, stars like Germaine Greer, Miranda Richardson, and Helena Bonham Carter pop up in unexpected cameos.
5) “Colonic irrigation” is merely an ad-
vanced enema.
6) “LaCroix” is the name of a fashion line.
7) A television season at the BBC is only SIX episodes. So don’t be alarmed when you begin to see reruns of the twelve existing episodes. The third season is due in Spring of 1995, and then, according to Saunders, who is also writer and co-creator, the girls may be hitting the big screen.
8) You’ll find Comedy Central’s Absolutely Fabulous on Mondays at 8:30 PM, Saturdays at 4:30 PM, and Sundays at 11:00 PM, but before you set your VCR, be aware that the show is an odd 40 minutes or so. Check the listings.
Extra Bonus: Keep an ear out for the Pet Shop Boys’ dance track devoted to Patsy and Edie. It’s a groove.
Our suggestion for beginners: Tape the show and watch it a few times, until you can understand what the girls are saying.
And while trying to keep up with Patsy and Edina for you, we’ve discovered a major plot line for next season. Get this: Patsy and Edina are coming to New York!
“I just hope people think it’s funny,” Lumley states, no doubt maneuvering the words between her fag and her crooked smile. “I hope they will. And if it doesn’t work, it’s not my fault. I’m simply an actress.”
Don’t worry, Pats, as always, your adventures around Manhattan promise to be exhilarating, exhausting, and absolutely fabulous.
I GAY POLITICAL POTBOILER
Flashpoint by Katherine V. Forrest Reviewed by Harmony Brenner
In September, 1991, a California radio station broadcasts the governor’s plan to veto a crucial gay-rights bill. This news causes Donnelly, Flashpoint's central figure, to mobilize her diverse gay and lesbian cohorts in a rustic cabin retreat, thus setting the stage for Katherine V. Forrest’s latest novel. Flashpoint spins a provoking fictional web of reference around real political struggle.
Forrest animates and humanizes these characters by showing them simultaneously at their best and worst, as they challenge and comfort each other through loss and discovery. Donnelly is a multi-faceted activist with impressive connections, and she leads the group body and soul. Pat Decker owns the cabin, and thus serves as the group’s reluctant hostess. Averill Calder Harmon, a professional golfer with a dislike for activism, lives in self-hating fear with her secretary and lover, Angela. Rounding out the female characters is Querida Quemada, a successful Latina professional and Donnelly’s current lover. Donnelly’s ex-husband and his male lover complete the cast.
Throughout the book’s uncharacteristically terse chapters, each character shares common pain, common shame, and uncommon healing. They process their own unique experiences as homosexuals while Donnelly prepares to test their commitment. Challenges created by homophobic employers, families, schools and peers unite Forrest’s characters despite clear differences in gender, class and ethnicity.
Like many cohesive cliques, intriguing yet painful love triangles once existed within the group. As their shared bond, Donnelly helps each of them cope, passing from Bradley to Averill to Pat like an Olympic torch of optimism and activism.
As usual, Forrest spices the entire story with wonderful snippets of dialogue and detail. The tranquility and provincial charm of the woodsy cabin pleasantly contrast the cosmopolitan lifestyles and concerns of its inhabitants. Her characters banter naturally, observe unobtrusively, and soliloquize elo-
quently. Each offers insight into the gay and lesbian experience rarely found in contemporary fiction. Forrest’s polished yet believable style of characterization remains the trademark of her bestselling fiction.
At times Flashpoint may seem ponderous, but when the governor finally issues his veto, crisis dynamics reverberate within the secluded cabin’s walls. Donnelly confronts her friends with a mission, testing the bounds of their delicately woven friendships. Each character must weigh the consequences of solidarity and true political commitment.
The choices made range from startling to satisfying, but each is ultimately credible. For the ardent Forrest reader, Flashpoint breaks new and significant ground .Forrest is not typically political, thus excluding most reference to current events. This story is a well-timed exception. I highly recommend it to Forrest fans and to anyone who enjoys the struggles of determined underdogs. If for no other reason, read Flashpoint to ignite your own sense of pride, energy, and activism. 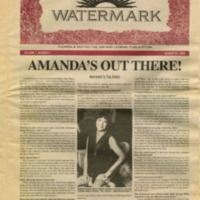