Postcard showing Albertson Public Library, formerly located at 101 East Central Boulevard in Orlando, Florida. Construction began in 1922 and the library opened in May of 1923. The City of Orlando had the library built after Colonel Charles Lewis Albertson donated his personal 12,000 to 15,000 volume book collection to the city. His condition was that the city build a home for his books. His collection was estimated at the time to be worth $100,000. The architect was well-known Murray S. King. The library was built in the Neo-Classical Revival style and took up about half the city block between Rosalind Avenue and Magnolia Avenue. The other half was occupied by the grounds of the Orlando Lawn Bowling Club. The building had two stories with a partially sunken first floor. It was Orlando's first regular public library. When the library opened, it had 21,000 volumes, and by the year's end it had increased to over 30,000. The Albertson Public Library was demolished in 1965 and the Orlando Public Library was built on the same lot in 1966.

Copyright to this resource is held by Genuine Curteich-Chicago  and is provided here by RICHES of Central Florida for educational purposes only. 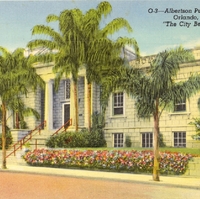