An area map of Oviedo, Florida, and its surrounding areas. A number of advertisements from the businesses surrond the perimeter of the map. While the date is unknown, the map is believed to have been published sometime between 1970 and 1978.

The Timucuan Native Americans originally inhabited the area of present-day Oviedo, although the remains of their settlements have disappeared. Homesteaders arrived along the shores of Lake Jesup in 1865 just after the Civil War ended and began growing celery and citrus. The area was called the Lake Jesup Community until March 13, 1879, when postmaster Andrew Aulin, a Swedish immigrant, chose the name Oviedo.

Copyright to this resource is held by Willett Ad Map and is provided here by RICHES of Central Florida for educational purposes only. 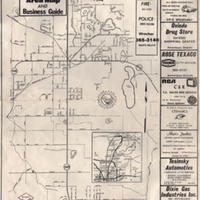